Cluster Headaches To Migraine: Relief From Most Painful Headaches

Treatment of Headaches can be very challenging as there are more than 150 types of headaches and Migraine and cluster headaches are among the most painful. Our specially formulated Homeopathy treatment for headaches in general and migraine, in particular, can be very effective if diagnosed early. 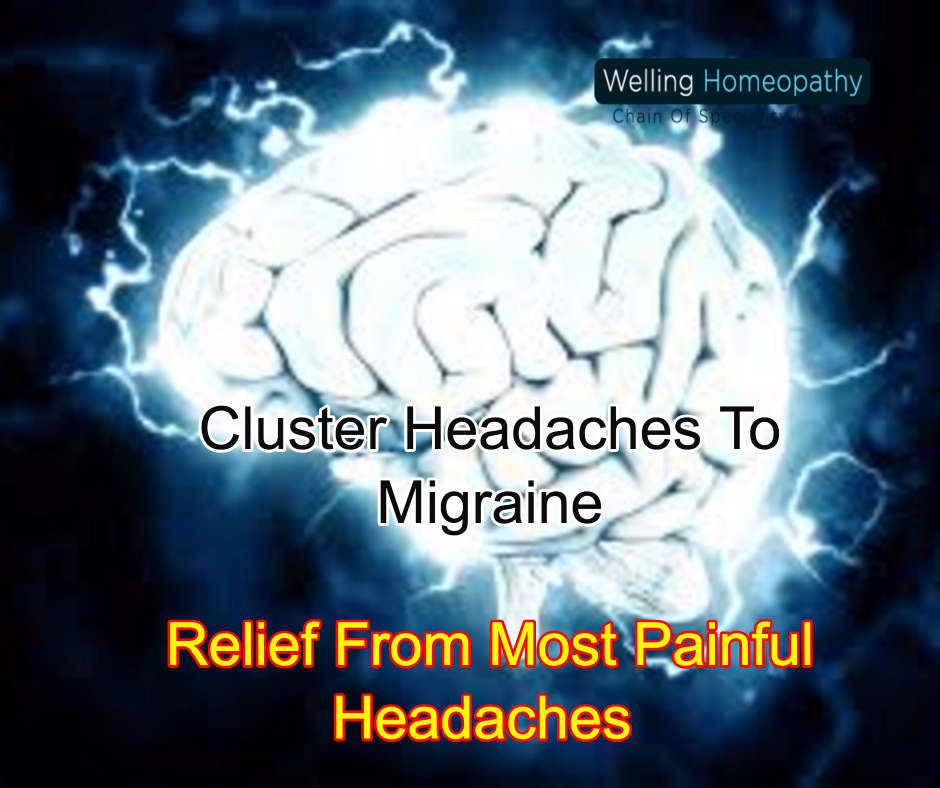 Imagine waking up with a slight headache and finding that it lasts for decades. Or driving to work one day and instead of seeing traffic ahead, you see wavy lines, flashing lights and stars where the cars should be.

An even harsher reality for some is developing a headache that is so excruciating, they start banging their head against a wall, simply to provide some form of relief.
These are all real — and harrowing — forms of headaches felt by many people around the world, where the occurrence is much more than a bout of pain soon fixed with a painkiller.
Instead, these headaches can become a stressful, disabling health problem, and they come in more than 150 forms, from the unusual, like the “alarm clock” headache — named after the fact that it wakes people up during the night — to more well-known pains in the head, like a monthly migraine.
A migraine may change your brain
Headaches are among the most common disorders of the nervous system, with almost half of the adult population experiencing a headache in 2015, according to the World Health Organization. They are started by an irritation of nerve fibers in the linings of the brain, causing pain.
But the exact cause or trigger of many headaches is often hard to pinpoint, connected to such factors as diet, emotions, genes or hormones.
Here’s a rundown of some of the most common, most painful and most disabling headaches people face today.
A new level of pain
Cluster headaches are considered by many experts to be the most painful type of headache a person could ever experience, affecting an estimated one in 1,000 people.
The headache targets one side of the head, with excruciating pain building in a matter of minutes, occasionally causing a stuffy or runny nose as well as redness and swelling of the eye.
The cause of an attack is unclear, but they can run in the family and are sometimes triggered by alcohol or strong smells such as perfume or petrol.
Cluster Headaches.
Many who experience cluster headaches believe they never truly understood pain until these episodes began, The 0-10 scale that’s often used to quantify pain has to be rewritten for cluster headache patients.
Though some patients have them one to three times a year, some live with them for 11 months of the year, while others experience them for years on end, with little recovery time in between.
The treatment of a cluster headache is more complicated than a simple pill.

There’s also a recently FDA-approved noninvasive treatment called VNS — vagus nerve stimulation — that applies an electric current to the neck, activating the vagus nerve. The VNS device is about the size of a cell phone and is placed on the neck, with the aim to provide relief from pain. It’s had some success in clinical trials, but more research on the procedure is needed, according to the US National Institutes for Health.

The Two Classes of Migraine: More than just a headache

Migraines are by far the most common type of headaches. Globally, 30% of people reported having a migraine in 2015, according to the WHO.

A classic migraine is the throbbing, pounding headache; it’s got the lights in front of your eyes; it’s got nausea and vomiting.
How your mouth is linked to your migraine?

The classic migraines might come with auras, which can affect language, movement, and visual perception. Auras can occur separately from head pain but are triggered by the same factors that cause the pain of migraines, such as stress, bright lights or a lack of sleep.
The most common presentation of migraine with aura is a visual disturbance. At times, patients can see flashing lights or stars in their visual field. They can see wiggly and wavy lines. There can be a hole in their visual field. There can be colors, spots in their visual field. This can last minutes to an hour (or more).
I’ve had patients that have been terrified of the visual loss, more so than the actual head pain.
Monteith described how some migraines can mimic the symptoms of a stroke: The afflicted can go numb on one side of the body and/or lose the ability to speak coherently. But with regular migraine treatment such as prescription painkillers or another class of drugs known as triptan medications, they can be back to normal in hours.
It’s in the family
Whatever the migraine, it’s highly likely you’ll only experience them if you have a family history, because migraines are connected to your genes.
We’re not sure what gene it is yet, adding that this genetic variation makes migraine patients more susceptible to pain in their head, but it also makes them more likely to suffer from motion sickness, nausea and vomiting, and vertigo.

Their (gastrointestinal) tract is different, (and) their skin tends to react differently, the genetic variation behind migraines also affects other parts of the body. As genes are an important tool for diagnosing migraines, Lyden said, he always makes sure to ask his patients for their family histories.

Migraines may come and go, but some headaches just won’t go away.
A rare form of headache with the ability to last months or even years on end is known as new daily persistent headaches.
These are a rare type of a headache that happen one day and then persist. Patients with that headache can tell you the day and what they were doing when it started because it’s so unusual. It could persist for decades, or it could go away in three months or six months.
The exact cause of these headaches is unknown, but for some people, a very traumatic or emotional experience has marked the onset of the headache.

Daily painkillers are avoided, as they can result in medication-overuse headaches.

This type is one of the most common chronic headache disorders, affecting 1% to 2% of people worldwide.
The headaches are caused by overusing acute pain relief medicine, such as paracetamol, codeine and triptans. They can be set off if people use the medicine more than two or three times a week or for more than 10 days a month.
When a dose of medicine wears off, the pain reappears, leading people to take more. Overuse then causes the medicine to stop helping the pain and start causing headaches instead.
The only way to stop medication-overuse headaches is to stop taking medication. This can be done either abruptly or gradually over time.

Headaches come in all shapes and sizes, from sharp, stabbing pain to prolonged dull aches.
To steer clear of the more average kinds, it’s best to sleep well, avoid caffeine and get plenty of aerobic exercise.
For any more unusual symptoms, make sure to meet and talk to our doctors, who could help bring complete recovery from Headaches.