All You Ever Wanted To Know About Crohn’s Disease.

Crohn’s disease is a chronic, inflammatory bowel disease that affects the lining of your digestive tract. It can lead to abdominal pain, diarrhoea, fever and weight loss. This blog post will cover all you need to know about Crohn’s Disease!

If you just wish to know about our natural Homeopathy treatment for the complete cure of Crohn’s disease, book an appointment to consult our specialist today. We have advised more than 4300 patients of Crohn’s disease in the last 18 years.

Call +91 8080 850 950 to book an appointment to meet one of our specialists or to consult online and order your custom-made medicines for Crohn’s disease.

What is Crohn’s Disease?

Crohn’s disease is an inflammatory bowel disease or irritable bowel syndrome that causes ulcerations in the lining of the intestines, inflammation and swelling. Occasionally it can lead to complications like colitis and abscesses which usually indicates when doctors would need to take drastic measures for safe treatment. 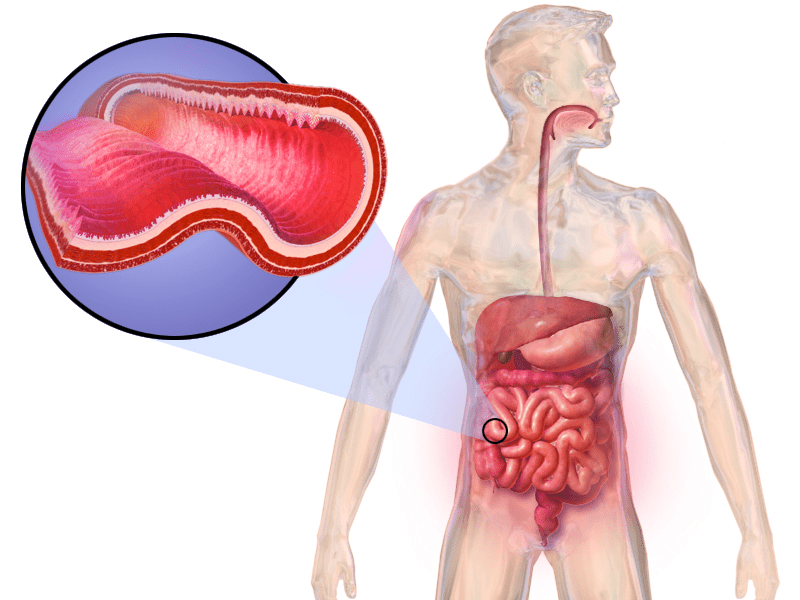 Individuals with Crohn’s often suffer from abdominal pain, weight loss, diarrhoea and fever. The disease has now been known to affect children as well and it is a more serious condition for them. There are treatments available for those suffering from the disease but dieting can also be of great help in alleviating or reducing the symptoms.

How Crohn’s Disease Makes You Feel?

Individuals with this disease usually experience periods of remission wherein they do not suffer from any pain, diarrhoea or weight loss. These remissions may last for weeks or even months but patients must realize that this does not mean that they are completely healed already. If they wish to avoid relapses, later on, proper dieting and maintenance become very important. 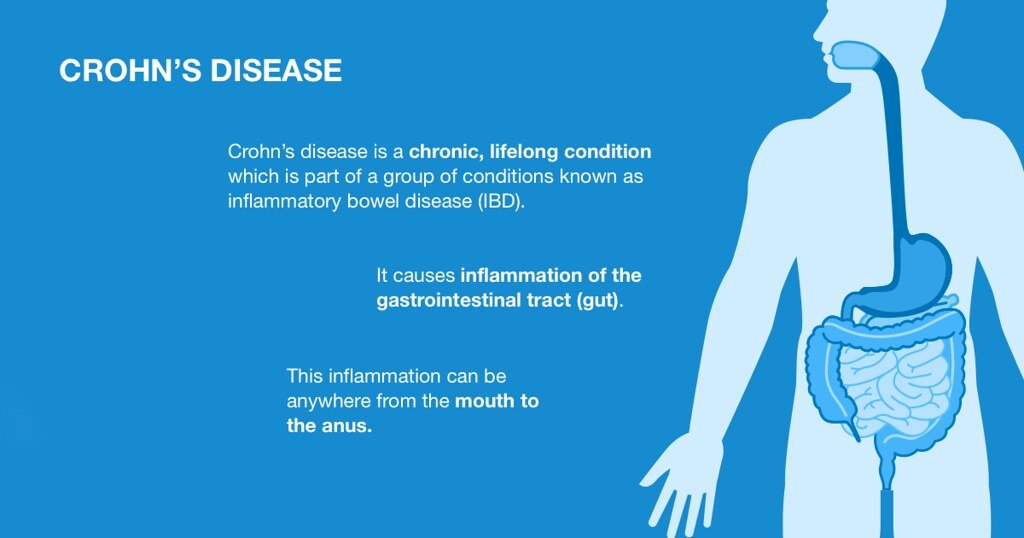 It is during these times when individuals may tend to eat a lot thinking that it won’t affect their health. However, this is not true. Foods with high-fat content are actually the worst for Crohn’s patients during this stage of their lives. While being in a state of remission, it is best to eat foods that will make them feel better and stronger instead of just eating anything that comes along.

Individuals with Crohn’s disease may suffer from many symptoms. The most common symptom is abdominal pain which can worsen due to inflammation and/or ulcerations in the intestines. Weight loss, fever and diarrhoea are also common. It is important to note that children can be affected by the disease as well and it can be a more serious condition for them. 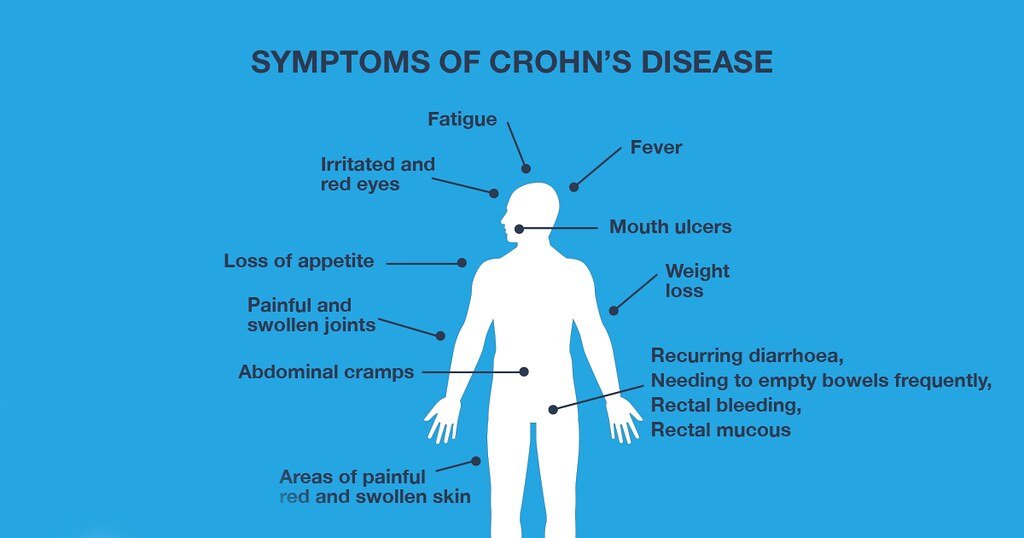 There are treatments for people suffering from Crohn’s but dieting is also very effective in reducing or maybe alleviating the symptoms of the disease. Dieting requires careful planning since patients cannot eat high-fat foods while in remission.

Crohn’s disease is diagnosed based on the symptoms and medical history of a patient. The doctor may order blood tests to rule out other conditions such as anaemia, thyroid problems, irritable bowel syndrome, etc. The patient may also need to undergo imaging such as colonoscopy, computed tomography (CT) scan or abdominal X-rays to confirm the diagnosis. However, these tests are not always necessary and depend on the severity of the symptoms and how long they have been present

The treatment options for Crohn’s disease include medication and surgery. The doctor would need to discuss the best treatments available for the patient depending on his age, the severity of symptoms and overall health.

When a person is in remission, all that he needs to do is stick with dieting. Eating healthy foods will help strengthen the immune system which can also prevent further problems and complications. If an individual decides to eat unhealthy food during times of remission, it may lead to another flare-up which may even last longer or be more painful than before. However, if you feel like having something sweet during one of your “healthy” eating periods then honey or sugar-free candies are good options since they contain natural sugars and are not processed, unlike other refined sweets.

Crohn’s patients need to be aware of the food they intake in order to manage their condition. Good sources of nutrition for people with Crohn’s disease are high-fibre foods such as whole grains, fresh vegetables, and fruits. Proteins such as poultry, fish and beans also provide plenty of protein, minerals and omega-3 fatty acids which act as an anti-inflammatory agent for those suffering from Crohn’s.

One thing that needs to be taken into consideration is that a person with Crohn’s disease has to keep his blood sugar levels steady by eating smaller meals more often throughout the day instead of three big meals (early morning, noon and evening).

A diet like this can seem difficult because it requires a lot of planning. It is not easy to stick with it because a person will need to choose the time when he eats his meals very carefully. By taking these steps, you can prevent your Crohn’s from getting worse and also be able to control other symptoms that may arise throughout your life and make you a healthier person overall.

There are many different causes of Crohn’s disease. Researchers believe a number of factors contribute to the development of the disease:

Genetics – Crohn’s disease tends to run in families. There is usually also an increased risk for developing the disease if a close relative has it.

Dietary Factors – Diet is a factor in Crohn’s and some people have reported that certain foods can cause inflammation or ulcers in the intestines, including nuts, milk, corn, wheat, eggs, fish and meat. Cigarette smoking also increases your risk of developing Crohn’s.

Infections – Some people with Crohn’s have reported that their symptoms worsened after catching an infection, particularly an intestinal infection such as traveller’s diarrhoea or bacterial gastroenteritis.

There is no certain cause for Crohn’s disease. Researchers have not discovered exactly what causes the inflammation of the intestine to occur but a number of factors could play a role in triggering it:

Environment – It has been suggested that the environment can trigger an immune response in people susceptible to Crohn’s disease. If you live close to fields where herbicides are used or if you spend time near specific substances like cigarette smoke, dust, exhaust fumes and radioactive fallout then your risk for having a flare-up may increase. The reason why environmental ingredients can lead to Crohn’s attacks is that they cause damage to tissue which leads to inflammation.

There are a number of ways to prevent Crohn’s disease

1. Check with your doctor about what foods you should avoid that might cause inflammation or ulcers in the intestines

2. If you live close to fields where herbicides are used, if you spend time near specific substances like cigarette smoke, dust, exhaust fumes and radioactive fallout then your risk for having a flare-up may increase. Prevention of Crohn’s Disease is important because it will help reduce inflammation which leads to the Crohn’s attack occurring. Prevention reduces the risks of developing serious health concerns like cancer due to the severity and frequency of the attacks.

Crohn’s disease is an autoimmune disorder in which the body’s immune system wrongly attacks the lining of the digestive tract. This leads to inflammation, ulcers and narrowing of parts of the intestine and colon. It can occur anywhere from your mouth to your anus but it often affects people in the lower part of their bowel such as their rectum.

When you suffer from Crohn’s, you may have periods of time when all seems well followed by flare-ups or periods where your symptoms are worse than during a flare-up. Symptoms usually come and go for no clear reason.

In addition to having symptoms that vary from day to day, people with Crohn’s may need to deal with many different complications because of this disease. Some of the most common ones are:

* Inflammation in other parts of your body, such as your joints or skin * Narrowing of the intestine (strictures) * Fistulas-abnormal passageways between two organs. For example, a fistula can develop between your colon and bladder. During a flare-up, you may need surgery to remove extra tissue that has formed to treat this complication. It is important for people with Crohn’s disease to have an accurate diagnosis so that they can get proper treatment. In some cases, doctors cannot determine the cause of symptoms and rule out other disorders before making a definitive diagnosis of inflammatory bowel disease (IBD).

What other problems can Crohn’s disease cause?

Crohn’s Disease may cause other problems like inflammation in other parts of your body, such as your joints or skin. Narrowing the intestine (strictures) is a complication that may happen as well as fistulas-abnormal passageways between two organs. There may also be problems with the structure of your intestines, such as abnormal changes to the tissue and shape (structure).

If you have Crohn’s disease, then in addition to abdominal pain and diarrhoea, you might have other symptoms.  These include:

Bloody stool, Fever, Anemia, Weight Loss, Fatigue, Nausea, Vomiting, Diarrhea, Cramps or pain that wakes you up from sleep, Joint Pain, Severe itching, Skin sores, Ulcers in Mouth, Bowel obstruction, Fistula Formation, Malnutrition, Menstrual irregularities, Osteoporosis. In the past, there were concerns about a possible increased risk of colon cancer in Crohn’s disease, but more recent studies have not confirmed this finding.

In some people, the symptoms of Crohn’s disease may go away for months or years (remission) and then return. In others, the symptoms may be continuous. Some people have permanent bowel damage leading to anaemia, malnutrition, failure to grow properly in children and stunted growth in adults (growth retardation).  Other complications include Chronic abdominal pain – Intestinal blockage that requires surgery- Fistulas-Skin sores caused by inflammatory bowel disease.- Abscesses – Ulcers that break through the intestinal lining into deeper tissue layers–which can lead to a life-threatening infection.

Book an appointment to meet our specialist to understand more about our natural treatment for Crohn’s Disease.