Homeopathic treatment of epilepsy at Welling Clinics starts with a detailed pre-treatment analysis followed by our tailor-made Homeopathic medicines for epilepsy. The treatment not only helps in reducing epilepsy attacks but also helps in the complete cure of Epilepsy, depending on the cause and duration of epilepsy.

Visit one of our clinics or chat with our doctors online for more details about our homeopathic treatment of epilepsy.

Call +91 8080 850 950 to book an appointment or to consult and order online. Consult our specialists today for a detailed evaluation and to start your customised Homeopathy medicines for Epilepsy. 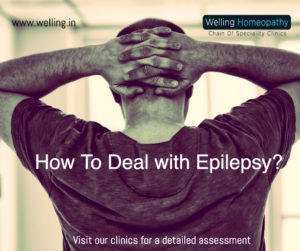 Epilepsy is a condition where the nerve cell activity in the brain is disturbed.  Epilepsy is a disorder in which nerve cell activity in the brain is disturbed, causing seizures or periods of unusual behaviour, sensations and sometimes loss of consciousness.  People with epilepsy behave differently. Some simply stare blankly for a few seconds during a seizure, while others repeatedly twitch their arms or legs.  You need to have two unprovoked seizures to be diagnosed with epilepsy. All seizures need to be treated because they can be dangerous during activities such as driving or swimming.

These result from abnormal activity in just one area of your brain. These seizures fall into two categories:
-Simple partial seizures. These are focal seizures without loss of consciousness. They may alter emotions or change the way things look, smell, feel, taste or sound. They may also result in involuntary jerking of a body part, such as an arm or leg, and spontaneous sensory symptoms such as tingle

These seizures involve a change or loss of consciousness or awareness. During a complex partial seizure, you may stare into space and not respond normally to your environment or perform repetitive movements, such as hand rubbing, chewing, swallowing or walking in circles.

Epilepsy most of the time has no identifiable cause. The condition may, however, be traced to various factors. Some types of epilepsy run in families. In these cases, it’s likely that there’s a genetic influence. Certain genes may also make a person more sensitive to environmental conditions that trigger seizures.

Epilepsy can sometimes be associated with developmental disorders, such as autism and neurofibromatosis.

Treatment of choice for epilepsy is customised Homeopathy Treatment that is specially formulated for you.  Your doctor will advise you about the appropriate time to stop taking medications. More than half the children with epilepsy who aren’t experiencing epilepsy symptoms can eventually discontinue medications and live a seizure-free life. Many adults also can discontinue medications after two or more years without seizures.
Finding the right medication and dosage can be complex. Your doctor will consider your condition, frequency of seizures, your age and other factors when choosing which medication to prescribe. Your doctor will also review any other medications you may be taking, to ensure the anti-epileptic medications won’t interact with them. Your doctor likely will first prescribe a single medication at a relatively low dosage and may increase the dosage gradually until your seizures are well controlled.
Unlike Homeopathy treatment, Conventional anti-seizure medications may have some side-effects like:

Homeopathic Treatment for Epilepsy in Mumbai

We have 6 Homeopathy clinics in Mumbai, with experienced Homeopathy specialist to offer you detailed evaluation and our speciality homeopathy treatment for Epilepsy.

Homeopathic Treatment for Epilepsy in Surat

We have a Homeopathy clinic in Adajana, Surat, with Senior Homeopathy specialist, trained at our Mumbai Clinic under Dr.Welling,M.D. to offer you detailed evaluation and our speciality homeopathy treatment for Epilepsy.

Visit one of our clinics or chat with our doctors online for more details on our specially formulated Homeopathy treatment for Epilepsy.