Myeloma is an aggressive blood cancer. It attacks your bones, kidneys and nerves. It is usually treated by a combination of chemotherapy and steroids. There are many side effects to these treatments.

Unfortunately, if you fail treatment, it can become life-threatening. This is the reason why we developed our specially formulated homeopathy treatment for multiple myeloma.

Homeopathy treatment is a natural therapy, which has been successfully used by us for the treatment of multiple myeloma for many years. Meet our specialist Dr.Welling, today to know how the treatment can help you. You can also consult online and order your custom-made medicines online. 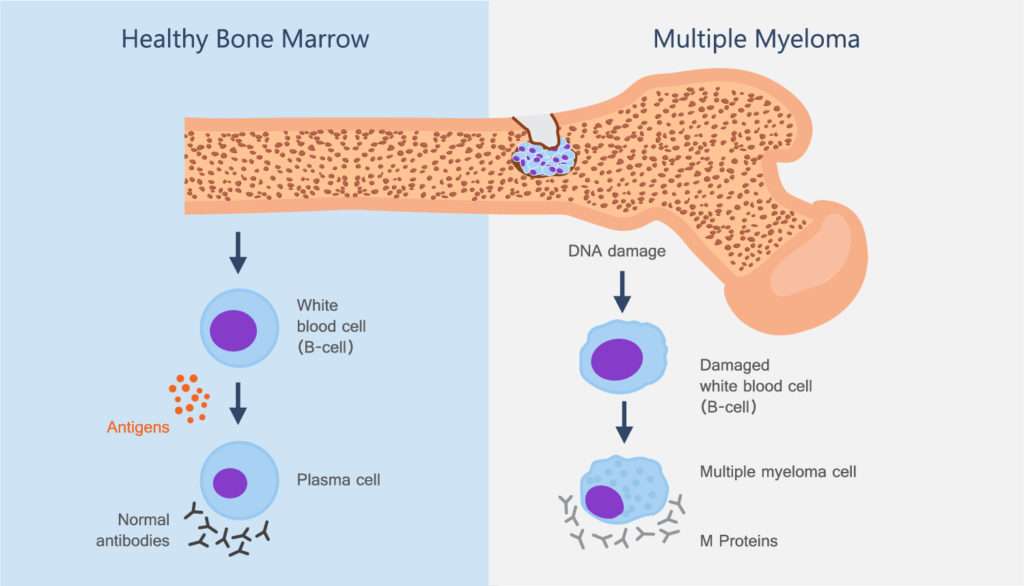 What is Multiple Myeloma?

Myeloma is a cancer of the plasma cells that can affect people of all ages. This type of cancer can develop in people of any age. This condition can cause pain and swelling in the bones. Multiple Myeloma is cancer that affects the bone marrow, which is the soft tissue inside the bones. The cancer cells grow in the blood and eventually form tumours in the bone marrow.

What are symptoms of Multiple Myeloma?

Multiple myeloma is a form of blood cancer that usually affects the bone marrow, which is responsible for producing blood cells. This disease is usually diagnosed in people over the age of 50, although it can occur at any age. The most common symptoms include fatigue, weight loss, bone pain, and anaemia. There are many different treatments for this disease, including chemotherapy, stem cell transplant, and other treatments.

Plasma cells are white blood cells that produce antibodies. They are found in the bone marrow and in the lymph nodes.

When the body’s immune system fails to clear the abnormal plasma cells from the bone marrow, the bone marrow becomes overloaded and begins to die off. This leads to anaemia, kidney failure, and other symptoms. Multiple myeloma is the second most common blood cancer in adults after non-Hodgkin lymphoma.

In addition to the signs and symptoms of MM, there are several tests that can help diagnose the disease. The most common test used to diagnose MM is the blood test. Other tests include the biopsy of the bone, the spinal tap, and the MRI.

The standard treatment for Multiple Myeloma

The standard treatment for MM is a combination of chemotherapy and autologous stem cell transplantation. There are also other treatments that are used depending on the stage of the disease and the individual patient’s symptoms.

We have developed a Homeopathy treatment for the long-term management of Multiple Myeloma. The goal of treatment for MM is to prolong survival, improve quality of life, and reduce symptoms. The choice of therapy depends on the stage of the disease, the patient’s age and overall health, and the type of cancer that has developed.

What is the prognosis of Multiple Myeloma?

Chemotherapy, also called systemic therapy, is one of the main treatments for multiple myeloma. It involves drugs that kill cancer cells by interfering with their growth. Chemotherapy may be given as part of combination therapy or alone.