12 Steps to Living with Urticaria

Living with urticaria can be difficult, but the first step is to know what is it and what are treatments available so you don’t need to live with it forever but get cured. The first treatment option should be our safe and natural CUREplus Homeopathy Treatment for Urticaria, the proven treatment process developed at Welling Clinics and having cured over 8600 patients from 108 countries in the last 18 years. See our Homeopathic specialist if you wish to get cured of Urticaria and not keep thinking of living with Urticaria. 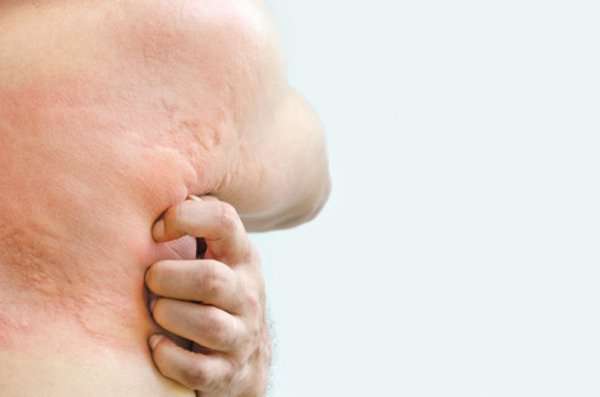 Urticaria is a common skin condition that causes urticarial rash, or hives, to appear on the skin. It’s estimated that urticaria can affect up to 10% of people worldwide and often starts in childhood as one of three different types: chronic urticaria (lasting more than 6 weeks), acute urticarial vasculitis, or physical urticarias (such as cold urticaria). It can be caused by a number of factors such as stress, exposure to allergens like pollen or pet dander, exercise and certain medications. 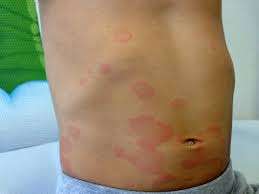 If you live with urticaria there are 12 steps to living with it. I want this blog post to be about what you should do if you have certain symptoms and how they will feel.

Urticaria is a skin condition where urticaria lesions (often called hives or wheels appear) in the upper layer of the epidermis. These urticaria lesions are also often itchy and can be localized to one area or have a widespread distribution. It is estimated that there are about 1 million cases per year in the United States and about 150 million globally. Urticaria is not contagious, nor does it come from poor hygiene. Urticaria is a symptom, not an illness. The urticaria can occur anywhere on the body and be triggered by many different stimuli including insect bites, drugs like aspirin or ibuprofen (or other similar medications), exercise, emotional stressors such as anxiety or anger. 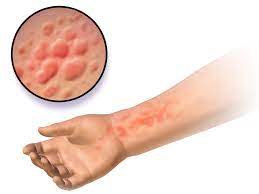 Common urticarial triggers include exposure to heat, cold air; food allergens — especially seafood in adults with fish-induced urticaria; foods that affect some people’s latex allergies such as bananas; contact with certain chemicals found in dyes and detergents which can cause “chemical urticaria”, pressure from tight clothing around the waistband of trousers or elastic undergarments near the shoulder straps called bra strap dermatitis causing chafing caused by urticarial urtication; and emotional stress.

Urticaria is often diagnosed by a simple skin test called the prick test or scratch test where raised urticarial lesions are induced by gentle scratching of the surface of the rashes with a needle to see if they disappear, thereby ruling out conditions like eczema, heat rash, fungal infection (ringworm) or contact dermatitis. A diagnosis can be confirmed when typical urticaria lesions show up within 60 minutes after exposure to an allergen in what’s known as delayed pressure urticaria (or DPU).

How Urticaria Presents Itself?

Urticaria is caused by the release of histamine from mast cells. It usually presents as welt like bumps or blisters on the skin. The urticarial reaction typically evolves over a period of hours, can last for days and may go into weeks.

An urticarial rash consists of small hive-like marks on the skin that occurs within minutes to hours after contact with an allergen. These urticarial rashes often result in red, itchy bumps and can cause severe discomfort. 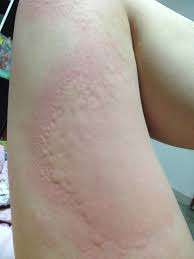 Most people who have had one episode will not experience another for years; however, some may become chronic sufferers without knowing why. Anyone experiencing more episodes should see their doctor.

Urticaria is a common, chronic, and sometimes painful skin condition. It can also be called urticaria (or hives) or urticarial dermatitis. Urticaria is the delayed hypersensitivity reaction of the immune system to urushiols found in poison ivy, oak, and related plants. It leads to urticarial weals.

Urticaria can be caused by many different triggers, including allergens such as pollen; foods and drinks like milk, peanuts or soybeans; certain medications such as penicillin allergy shots to treat strep throat, a drug called NSAIDs (nonsteroidal anti-inflammatory drugs) used for arthritis pain relief; reactions that are not allergies but result in urticaria because of medication side effects, jaundice from liver problems and other rare conditions.

Everyone reacts differently to urushiols. Some people are not affected by them at all while others react only mildly. Others again can react severely even with the slightest exposure. This depends on how susceptible the person is to urushiols as well as their age, race, and other factors. For example, there have been cases reported in which children reacted severely while adults did not.

Urticarial urushiols are proteins found in poison ivy, oak and related plants that produce an allergic reaction when a person comes into contact with them or breathes the urushiol-polluted air around these plants. Urtica dioica is also known as stinging nettle; urticaria can be caused by touching this plant just like other types of urticarias which can be contacted through coming into contact with urushiol containing plants/animals. It has been shown that some people react to urisholols after only one exposure, but others require repeated exposures before they develop symptoms (typically about four). Because it takes weeks for allergens spread over large areas to decompose urticarial urushiols, the Urtica plant can be a danger for months after it has been cut down or removed.

The symptoms of urticaria can be varied, though they are often described as a raised rash of urticaria or hives. The urticarial skin lesions can range in size from being only slightly larger than the head of the pin to many inches across.

– warmth and itchiness around these areas

– swelling at the site of urtication

The most common form is chronic urticaria which has been ongoing for six months or more with no identifiable causes or triggers identified by your doctor. This type usually affects less than one per cent of people who have urticaria. Chronic cases also tend to be marked by wheals that may last up to 48 hours after an attack starts. Acute urticaria will typically resolve within days or weeks.

No matter what form it takes—acute

The most common treatment options for Urticaria are antihistamines and corticosteroids.

– The most common treatment options for urticaria are antihistamines and corticosteroids.

*Antihistamines: Antihistamine drugs such as diphenhydramine (Benadryl) work by preventing the effects of histamine, a substance in your body that causes itching, swelling, and inflammation. Some people also have side effects from these medications including drowsiness or difficulty concentrating.

Urticaria is not just an annoying skin condition, but it means your immune system has a malfunction. The hives or eruptions that appear on the surface of your skin are due to internal war between hypersensitive reactions and immunological disturbance. While treating urticaria symptoms like rash, itching, swelling and pain should be relieved symptomatically; correcting this reaction internally with homeopathic treatment for urticaria can also treat the problem at its root level by restoring balance within our bodies’ natural defences against disease-causing microbes through a deep correction in immunity levels.

Common Homeopathic remedies for urticaria are

Tips on Living with Urticaria

The two main causes of urticaria are food allergies and integumentary disorders. Urticarial is a skin disorder that causes some of the small blood vessels to become swollen and visible through the skin. Many people think urticarial only appears on the skin, but urticaria may also occur within the respiratory system. This type of urticaria usually results from hypersensitivity to inhaled vapours or chemicals in dust or fumes such as ammonia, chlorine, gasoline, bleach, paint thinner or household cleaning products.

“The urticaria skin disorder is the one that causes individuals to have red hives on their body.” The outbreaks of urticarial can be embarrassing, but there are ways you can manage your urticarial.

– Avoid triggers such as alcohol and fatty foods. Avoid foods that may cause an allergic reaction such as peanuts, wheat or shellfish. This list includes alcohol, caffeine in any form (including chocolate), citrus fruits and juices, milk products including lactose intolerance inducing dairy products like mousse or whipped cream; nuts including almonds or walnuts; soybean oil; eggs and egg whites; raw fish especially if you have a history of that food item causing problems.

– Apply moisturizer to affected areas for relief from dryness caused by scratching; this will help prevent scars if scratched too hard or often.

– Wear loose clothing around arms and legs so it won’t catch onto anything when itching/scratching occurs.

– Get an allergy evaluation by a physician in order to eliminate any possible food allergies or sensitivities causing urticaria rash. A proper diagnosis will provide insights into how best to live with urticaria.

– Take medications such as antihistamines to control the symptoms of urticarial and ensure a good night’s sleep; this will help you regain your energy for work or school.

– Drink lots of water, at least eight glasses per day in order to stay healthy and hydrated during urticarial flare-ups. Water can also reduce any itching that may be caused by dry skin from scratching urticated areas too much because it helps retain moisture in the skin cells so they don’t become dehydrated.

– Seek Homeopathic treatment if urticarial is accompanied by difficulty breathing or swallowing, fever, persistent vomiting, feeling faint, chest pain like pressure or tightness). These are signs that urticarial may be more than just urticaria and needs medical attention.

– Wear a bracelet or necklace that is metal to identify urticated areas with someone you trust in case of emergency, such as paramedics.

– Try not to stress out over urticarial rash because it will only worsen the symptoms; instead try meditation, yoga, deep breathing exercises or other calming activities for relief from stress which can aggravate urtication skin disorders.

– Other Treatments: Medical treatment is not always an option so it’s important to have alternative methods in mind. These include learning how to control stress levels which can reduce episodes of chronic urticaria by reducing histamine production in response – this includes relaxation techniques like yoga or meditation to help you cope with urticaria symptoms.

– Meet our Homeopathic specialist for a detailed evaluation and to start your customised Homeopathic remedies for Urticaria. It will make your life easier, get rid of urticaria attacks for life and don’t have to think of living with urticaria.