Asperger’s Autism is a form of autism that impacts how a person sees and interacts with the world. It can be difficult for people who have Asperger’s to understand social cues and interact with others in a way that is considered “normal.” If you are the parent of a child who has been recently diagnosed with Aspergers, you may be wondering what this means for your family and your child. This article will provide an overview of Aspergers Autism, including symptoms, diagnosis, and treatment options.

Benefits of Homeopathy In Asperger’s Autism

Yes, specially formulated Homeopathy treatment process, developed by the legendary Indian Homeopath, Dr.Welling, M.D., based on his over two decades worth of experience of working with autism – giving him unparalleled insight into what works not just one specific type but rather every single client whose lives have been impacted by autism spectrum disorder.

The treatment has shown positive outcomes in multiple studies to help with Autism Spectrum Disorder in kids and young adults. 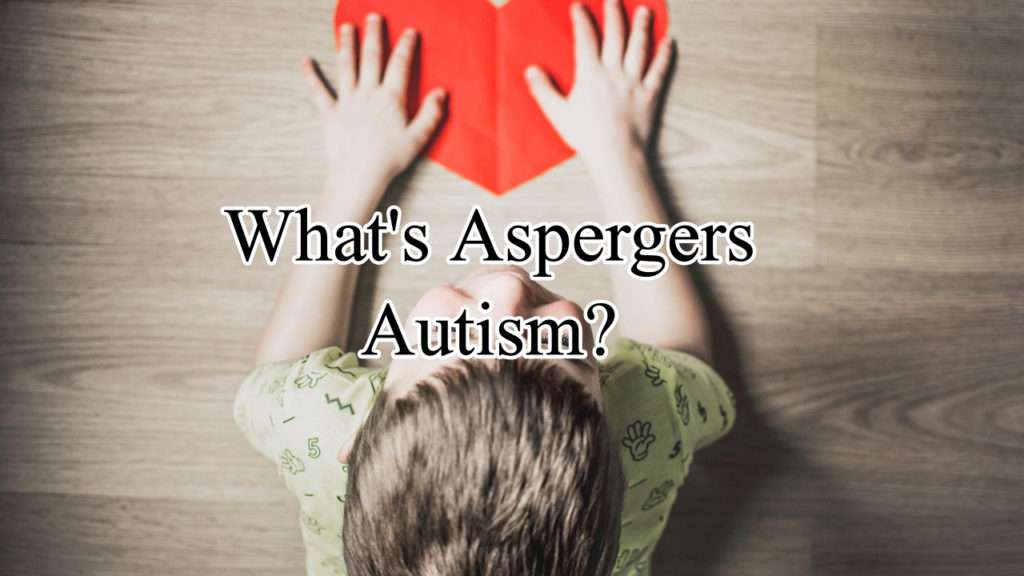 Aspergers Autism Spectrum Disorder (ASD) is a developmental disorder. It is characterized by difficulties with social interaction, verbal and nonverbal communication, and repetitive behaviours. People with ASD often have restricted interests and engage in repetitive movements.

A. Qualitative impairment in social interaction, as manifested by at least two of the following: marked impairments in the use of multiple nonverbal behaviours such as eye-to-eye gaze, facial expression, body postures, and gestures to regulate social interaction failure to develop peer relationships appropriate to developmental level a lack of spontaneous seeking to share enjoyment, interests, or achievements with other people (e.g., by a lack of showing, bringing, or pointing out objects of interest) lack of social or emotional reciprocity

B. Restricted repetitive and stereotyped patterns of behaviour, interests and activities, as manifested by at least one of the following: encompassing preoccupation with one or more stereotyped and restricted patterns of interest that is abnormal either in intensity or focus apparently inflexible adherence to specific, nonfunctional routines or rituals stereotyped and repetitive motor mannerisms (e.g., hand or finger flapping or twisting, or complex whole-body movements) persistent preoccupation with parts of objects

C. The disturbance causes clinically significant impairments in social, occupational, or other important areas of functioning.

E . There is no clinically significant delay in cognitive development or in the development of age-appropriate self-help skills, adaptive behaviour (other than social interaction), and curiosity about the environment in childhood

F. Criteria are not met for another specific Pervasive Developmental Disorder or Schizophrenia

G. If there is a history of Autistic Disorder or another Pervasive Developmental Disorder, the additional diagnosis for this disorder is warranted.

What are the signs and symptoms of Aspergers ASD in children and adults?

These behaviors are usually recognized during the second year of life. Social impairment manifests itself in the preschool years as difficulty making friends with same-age children or, if there is one close friend, difficulty keeping that relationship free from conflicts or interruptions. The child also has difficulty learning social skills through modeling or simple imitation.

Asperger’s is characterized by early-onset of difficulties in social interaction and restricted interests/repetitive behaviors. Early language development is often not delayed, but pragmatic language skills (the use of language in social contexts) are typically poor and there may be a slight delay in the acquisition of expressive language.

In adults Aspergers ASD , the main problems appear for interaction with people. They tend to be quiet, reserved and socially distant from their colleagues. The diagnostic criteria require that individuals with Aspergers have “severe impairments in social interaction” and that they show “restricted repetitive and stereotyped patterns of behavior, interests and activities.”

People with Asperger’s syndrome often lack social and communication skills. This may result in feelings of frustration, anxiety, stress, failure and isolation; this can lead to depression or mental health problems .

Alternatively people with Aspergers ASD tend to be outwardly contented, sensitive and caring towards others. They often show great determination in the workplace but their naivety when dealing with other people results in life-long difficulties with relationships and social acceptance.

The communication problems are varied, but result in impaired ability to engage in reciprocal conversation. People with Aspergers may have limited use of gestures, body language or facial expressions, which makes communication more difficult for both the individual and their communication partners. They also often struggle to understand complex verbal information, so they are quite literal in what they say.

People with Aspergers may have delayed language development or specific difficulties with speech – for example, answering a question literally, without understanding the ‘social’ context and therefore completely inappropriately (this can sometimes be identified as a lack of theory of mind) . Commonly it is seen that the individual with Aspergers will speak in a pedantic way, using long sentences and formal language. It may also be seen that the individual has difficulty understanding ‘unwritten rules’ of conversation; for example, changing the subject or initiating or ending conversations appropriately.

People with Asperger’s often have particular interests which they talk about obsessively and know an awful lot about, but they may struggle to understand the interest of other people in hobbies and general knowledge; this can result in ‘one-sided’ conversations.

Individuals with Aspergers ASD often have a very good rote memory, particularly relating to their special interests. They may also be extremely good at learning new facts and information, but struggle to grasp abstract concepts and generalising this knowledge. This differs from the learning difficulties sometimes associated with Aspergers; people with Aspergers may have an average intelligence quotient (IQ) and therefore often perform well academically.

People with Asperger’s sometimes like routine and can find change very difficult, as they prefer to have a relatively fixed daily routine. They also have difficulty tolerating bright lights and loud noises, which can cause them physical discomfort.

The symptoms of Aspergers are often apparent early in childhood, with delays in language development or social skills. Parents may worry that their child is deaf or does not hear them when they are young . However, as the child grows up, they may be very gifted at music or other skills.

Adults with Aspergers often make a lot of effort to mask their difficulties in social interaction and find it very stressful if their routine is disrupted. For example, a change to a regular meeting time may mean that the person arrives an hour early to ensure it does not change.

How is Aspergers ASD diagnosed and treated?

Aspergers ASD is diagnosed by an experienced health professional, such as a psychologist, psychiatrist or a Homeopathy consultant. The professional will look for symptoms of the disorder and may use a tool like the Diagnostic and Statistical Manual of Mental Disorders (DSM-5) to make a diagnosis.

There is no one-size-fits-all treatment for Aspergers ASD, but there is our specially formulated Homeopathy treatment that can be helpful. Therapy may help people with Aspergers learn how to socialize and communicate better. There are also medications that can help with some of the symptoms of Aspergers, such as depression or ADHD. A person’s treatment options will depend on their Aspergers ASD symptoms and how severe they are.

How is Aspergers ASD diagnosed?

Asperger syndrome, like other types of autism, can be diagnosed with standardised assessments such as the Autism Diagnostic Observation Schedule (ADOS) and the Childhood Autism Rating Scale (CARS). These distinguish autism from other disorders, but are not specific to autism.

ASD is also often diagnosed by age 3, using the standard Battelle Developmental Inventory Screening Test (BDIST). Other tests for younger children include the Early Screening of Autistic Traits Questionnaire (ESAT), the Autism Behavior Checklist (ABC), and the Screening Tool for Autism in Two-Year-Olds (STAT) which can also be used up to age four.

Asperger syndrome cannot yet be diagnosed with medical imaging but it is sometimes possible to observe differences in brain structure and function using imaging techniques such as magnetic resonance imaging (MRI) or a SPECT scan.

There are also genetic tests but most cases of Asperger syndrome appear to be sporadic – they occur as a result of mutations in the egg or sperm cells rather than from inherited disorders.

How is Aspergers ASD treated?

Conventional medicine has no cure for Asperger syndrome. However, many symptoms can be treated with appropriate therapies including our specially formulated Homeopathy treatment

Medications can be used to treat symptoms of Asperger’s such as depression, anxiety, or hyperactivity. The use of medication may reduce symptoms but will not cure the underlying disorder.

What are the challenges faced by people with Asperger’s ASD and their families?

There are many challenges faced by people with Aspergers ASD and their families. These include the potential for long-term unemployment, difficulty making friends often leading to isolation, lack of motivation due to low self-esteem, difficulty reading social cues which may lead to misinterpreting others’ intentions or being excluded from gatherings because they aren’t “social” enough , difficulty with sensory integration leading to over-stimulation and problems with anxiety, depression and epilepsy.

People with Aspergers ASD have a tendency to become fixated on certain things. They may not be able to read the subtle body language cues of others so may say offensive or inappropriate things without meaning to. This can lead to the person being socially excluded, bullied and often misunderstood.

People with Aspergers ASD have a tendency to become fixated on certain interests which they will talk about incessantly and for hours! They may have a very limited diet or get obsessed by patterns leading them not to want to wear certain clothes or eat certain foods. They may become fixated on obsessive routines which can be disruptive to family life and all too often, the individual with Aspergers ASD has no voice in what happens to them, especially when they reach adolescence.

Many people with Aspergers ASD have sensory integration difficulties leading them to crave over-stimulation such as bright lights, loud noises and textures such as sandpaper. For example, they may be unable to eat certain foods which can make mealtimes difficult or impossible for the whole family.

How can I get help for my child or myself if I think we might have Aspergers ASD?”

If you think you or your child may have Aspergers ASD, there are many ways to get help. The first step is to see our doctor or therapist who can diagnose Aspergers ASD. There are also many resources available to help you and your family, including books, websites, and support groups. You can consult our specialist for a complete and holistic assessment and tailor-made Homeopathic solution.

The diagnosis of Asperger’s autism can be a difficult and confusing process. It is important to remember that there are many ways you as the parent, caregiver, or family member can help your loved one with this condition live a fulfilling life.

If you have any questions about how we treat Aspergers Autism at our clinic or through virtual consultation, contact us today! We offer free consultations for those who would like more information on what treatment options might work best for their child. Give us a call on +91 8080 850 950 and speak to an online advisor to know more about our treatment of Aspergers Autism.