Treatment of cervical cancer with our custom-made Homeopathy medicines can help you recover from cervical cancer if treatment is started early.
We are sure you understand, only chemo and radiation are not going to cure cancer, it’s just going to be life long cycle after cycle of treatment. Probably that’s all you knew till today.

Call +91 8080 850 950 to book an appointment or to consult and order online. Consult our specialists today for a detailed evaluation and to start your customized treatment of cervical cancer.

The best long-term results are achieved by combination therapy depending on age, stage of cervical cancer, and general health condition of the patient. Conventional treatments like chemotherapy or radiation therapy help in faster removal of cancer, Immuno-knife Homeopathy treatment for cervical cancer can help in 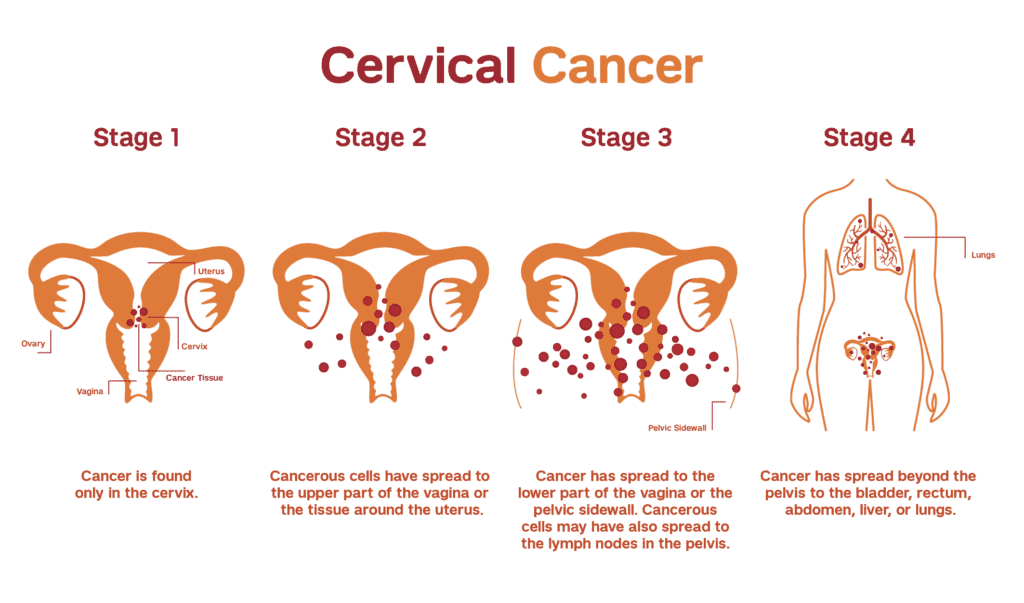 What is Cervical Cancer?

There are two main types of cervical cancer:

Sometimes, both types of cells are involved in cervical cancer. Other types of cancer can develop in the cervix, but these are rare

Stage 0:- In this stage, cancer cells are confined to the surface of the cervix (the innermost lining of the cervix). This stage is also called carcinoma in situ (CIS) or cervical intraepithelial neoplasia (CIN). These abnormal cells may become cancer and spread into nearby normal tissue.

Stage I: – In this stage, the cancer has grown deeper into the cervix, but has not spread beyond it. This stage is further divided into two subcategories:

Stage II: – In this stage, cancer has grown beyond the cervix and uterus, but has not reached the walls of the pelvis or the lower part of the vagina. In this stage, the disease has not spread to lymph nodes or distant sites. Stage II is further divided into two subcategories:

Stage III: – In this stage, cancer has spread to the lower part of the vagina or the walls of the pelvis, but not to nearby lymph nodes or other parts of the body. This stage is separated into two categories:

Stage IV: – In this cervical cancer stage, the disease has spread to nearby organs or other parts of the body. Stage IV is divided into two categories:

To diagnose cervical cancer following tests are carried out:-

Pap smear:- In this test during a vaginal examination, collection of cells from cervix to look for abnormal, or precancerous, changes in the lining of cervix is carried out.

Colposcopy: – It is carried out when the Pap smear results are abnormal. This test is carried out by using a magnifying lens (colposcopy) and collect and examine cells (biopsy) to determine whether cancer is present or not.

Positron emission tomography (PET) scan: – This scan can detect the spread of cancer beyond cervix or to nearby lymph nodes.

Computed tomography (CT) scan: – CT scan can show whether cancer has spread or not.

Pyelogram: – It is carried out by injecting a special dye into vein and takes an X-ray of urinary system.

Cervical cancer treatment includes a combination of treatments such as surgery, chemotherapy and radiation therapy.

Chemotherapy: – Chemotherapy uses anti-cancer drugs given intravenously or by mouth to destroy cancerous cells. Higher doses of chemotherapy are given when cancer has spread beyond the tumor or if your cancer returns after initial treatment. Studies show that low-dose chemotherapy when combined with radiation therapy, improves survival rates in women who have advanced cervical cancer.

Call +91 8080 850 950 to book an appointment or to consult and order online. Consult Mumbai’s Homeopathic Cancer specialists today for a detailed evaluation and to start your customized treatment of cervical cancer.