What is Female Infertility? and Other Frequently Asked Questions

There are a number of things that may be keeping you from getting pregnant. We have shortlisted few frequently asked questions by our patients and found reputed websites to answer them for you.

Having helped over 50,o00 couples get pregnant naturally with our ‘Homeopathy Assisted Reproduction Therapy“, we know the common questions a lady can have.

If you have a similar problem of difficulty getting pregnant naturally, meet our specialist or consult online to get pregnant naturally without going in for artificial treatments. We deliver medicines to over 100 countries.

What is female infertility? 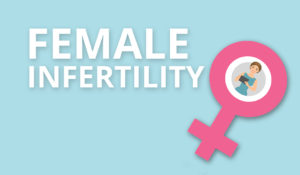 Infertility is a disease in which the ability to get pregnant and give birth to a child is impaired or limited in some way. For heterosexual couples (man and woman), this is usually diagnosed after one year of trying to get pregnant (but maybe diagnosed sooner depending on other factors). For heterosexual couples, one-third of the causes of infertility are due to a male problem, one-third are due to female problems, and one-third are due to combination or unknown reasons. When the cause of the infertility is found to come from the female partner, it’s considered female infertility or “female factor” infertility.

Problems with the uterus: This includes polyps fibroids, septum, or adhesions inside the cavity of the uterus. Polyps and fibroids can form on their own at any time, whereas other abnormalities (like a septum) are present at birth. Adhesions can form after a surgery like dilation and curettage (D&C) Problems with the fallopian tubes: The most common cause of “tubal factor” infertility is a pelvic inflammatory disease, usually caused by chlamydia-gonorrhea Problems with ovulation: There are many reasons why a woman may not ovulate (release an egg) regularly. Hormonal imbalances, a past eating disorder, substance abuse, thyroid conditions, severe stress, and pituitary tumors are all examples of things that can affect ovulation.

Problems with egg number and quality: Women are born with all the eggs they will ever have, and this supply can “run out” early before menopause. In addition, some eggs will have the wrong number of chromosomes and cannot fertilize or grow into a healthy fetus. Some of these chromosomal issues (such as “balanced translocation”) may affect all of the eggs. Others are random but become more common as a woman gets older.

There are a number of things that may be keeping you from getting pregnant:

Damage to your fallopian tubes. These structures carry eggs from your ovaries, which produce eggs, to the uterus, where the baby develops. They can get damaged when scars form after pelvic infections, endometriosis, and pelvic surgery. That can prevent sperm from reaching an egg in the tube. The egg and sperm meet in the tube. This is where the egg is fertilized and then moves down to the uterus to implant..

Hormonal problems. You may not be getting pregnant because your body isn’t going through the usual hormone changes that lead to the release of an egg from the ovary and the thickening of the lining of the uterus.

Cervical issues. Some women have a condition that prevents sperm from passing through the cervical canal.

Uterine trouble. You may have polyps and fibroids that interfere with getting pregnant.

Uterine polyps occur when too many cells grow in the endometrium, the lining of the uterus.

Fibroids grow in the wall of the uterus. Other abnormalities of the uterus can also interfere, infertility. For about 20% of couples who have infertility problems, the exact causes are never pinpointed.

The most common causes of female infertility include problems with ovulation, damage to fallopian tubes or uterus, or problems with the cervix. Age can contribute to infertility because as a woman ages, her fertility naturally tends to decrease.

Ovulation problems may be caused by one or more of the following:

A tumor or cyst

Eating disorders such as anorexia or bulimia Alcohol drug use

that causes a significant loss of body fat menstrual cycles Damage to the fallopian tubes or uterus can be caused by one or more of the following:

Polyps in the uterus Endometriosis fibroids

DES syndrome (The medication DES, given to women to prevent miscarriage or premature birth can result in fertility problems for their children.) cervical mucus can also cause female infertility. Abnormal cervical mucus can prevent the sperm from reaching the egg or make it more difficult for the sperm to penetrate the egg.

How is female infertility diagnosed?

Potential female infertility is assessed as part of a thorough physical exam. The exam will include a medical history regarding potential factors that could contribute to infertility.

Healthcare providers may use one or more of the following tests/exams to evaluate fertility:

urine blood test to check for infections or a hormone problem, including thyroid function

Laparoscope inserted into the abdomen to view the condition of organs and to look for blockage, adhesions or scar tissue.

HSG, which is an x-ray used in conjunction with a colored liquid inserted into the fallopian tubes making it easier for the technician to check for blockage.

Hysteroscopy uses a tiny telescope with a fiber light to look for uterine abnormalities.

Ultrasound to look at the uterus and ovaries. May be done vaginally or abdominally.

Sonohystogram combines ultrasound and saline injected into the uterus to look for abnormalities or problems.

Tracking your ovulation through fertility awareness will also help your healthcare provider assess your fertility status.

Can infertility in women be prevented?

There is usually nothing that can be done to prevent female infertility caused by genetic problems or illness.

However, there are several things that women can do to decrease the possibility of infertility:

Avoid heavy or frequent alcohol use

What causes infertility in men?

Infertility in men is most often caused by:

A problem called varicocele (VAIR-ih-koh-seel). This happens when the veins on a man’s testicle(s) are too large. This heats the testicles. The heat can affect the number or shape of the sperm.

Other factors that cause a man to make too few sperm or none at all.

Sometimes a man is born with the problems that affect his sperm. Other times problems start later in life due to illness or injury. For example, cystic fibrosis often causes infertility in men.

What causes infertility in women?

Most cases of female infertility are caused by problems with ovulation. Without ovulation, there are no eggs to be fertilized. Some signs that a woman is not ovulating normally include irregular or absent menstrual periods.

Ovulation problems are often caused by polycystic ovarian syndrome (PCOS). PCOS is a hormone imbalance problem which can interfere with normal ovulation. PCOS is the most common cause of female infertility. Primary ovarian insufficiency (POI) is another cause of ovulation problems. POI occurs when a woman’s ovaries stop working normally before she is 40. POI is not the same as early menopause.

Less common causes of fertility problems in women include:

, which are non-cancerous clumps of tissue and muscle on the walls of the uterus.

What things increase a woman’s risk of infertility?

Many things can change a woman’s ability to have a baby. These include:

Being overweight or underweight

How will doctors find out if a woman and her partner have fertility problems?

Doctors will do an infertility checkup. This involves a physical exam. The doctor will also ask for both partners’ health and sexual histories. Sometimes this can find the problem. However, most of the time, the doctor will need to do more tests.

In men, doctors usually begin by testing the semen. They look at the number, shape, and movement of the sperm. Sometimes doctors also suggest testing the level of a man’s hormones.

In women, the first step is to find out if she is ovulating each month. There are a few ways to do this. A woman can track her ovulation at home by:

Writing down changes in her morning body temperature for several months

Writing down how her cervical mucus looks for several months

Doctors can also check ovulation with blood tests. Or they can do an ultrasound of the ovaries. If ovulation is normal, there are other fertility tests available.

Some common tests of fertility in women include:

Laparoscopy (lap-uh-ROS-kuh-pee): A minor surgery to see inside the abdomen. The doctor does this with a small tool with a light called a laparoscope (LAP-uh-roh-skohp). She or he makes a small cut in the lower abdomen and inserts the laparoscope. With the laparoscope, the doctor can check the ovaries, fallopian tubes, and uterus for disease and physical problems. Doctors can usually find scarring and endometriosis Finding the cause of infertility can be a long and emotional process. It may take time to complete all the needed tests. So don’t worry if the problem is not found right away.

About 25% of women with infertility have infrequent or absent ovulation. These women usually have irregular periods or no periods at all. Ovulation can be disrupted by changes in the way certain hormones are released from the hypothalamus (a part of your brain, releasing gonadotropin-releasing hormone [GnRH]) and the pituitary gland (a gland near the base of your brain, releasing luteinizing hormone [LH]). LH and follicle-stimulating hormone (FSH) signal an egg to develop and be released from the ovary.

Problems that interfere with normal LH and FSH release include:

exercising too much extreme stress

Other hormonal conditions that interfere with ovulation or affect fertility are:

(a disorder that causes very high levels of cortisol, sometimes called “the stress hormone”) A woman’s ability to get pregnant can also be affected by her age, since the number and quality of her eggs gradually decrease beginning around age 35. Other factors include:

sexually transmitted diseases, like chlamydia and gonorrhea, that can cause tubal blockages

excessive caffeine, any smoking or alcohol, or recreational drugs like cocaine and marijuana

What is intrauterine insemination (IUI)?

Intrauterine insemination (IUI) is an infertility treatment that is often called artificial insemination. In this procedure, the woman is injected with specially prepared sperm. Sometimes the woman is also treated with medicines that stimulate ovulation before IUI.

IUI is often used to treat:

Women who have problems with their cervical mucus

What is assisted reproductive technology (ART)?

Assisted reproductive technology (ART) is a group of different methods used to help infertile couples. ART works by removing eggs from a woman’s body. The eggs are then mixed with sperm to make embryos. The embryos are then put back in the woman’s body.

Want to know more about our ‘Homeopathy Assisted Reproduction Therapy“, Want to get pregnant naturally? Talk to us today.