Our Homeopathy Treatment for Myasthenia Gravis can help you with

Call +91 8080 850 950 to book an appointment or to consult and order online. Consult our specialists today for a detailed evaluation and to start your customised Homeopathy medicines for Myasthenia gravis.

What is Myasthenia Gravis? 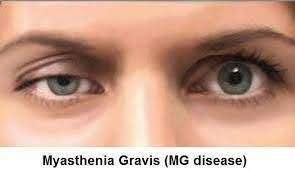 Myasthenia gravis is a chronic condition that causes muscles to tire and weaken easily. For example, if you have myasthenia gravis, you may notice that during a meal, your jaw muscles become tired and weak, interfering with your ability to chew food. Sometimes, the muscles that control breathing, neck and limb movements are also affected.

This waxing-and-waning weakness of muscles, worsening with use and improving with rest, is a hallmark of this particular disease. There typically are periods when you may notice more symptoms, interspersed with periods when symptoms decrease or disappear.

This prevents messages from being passed from the nerve endings to the muscles, which results in the muscles not contracting (tightening) and becoming weak.

It’s not fully understood why some people’s immune systems produce specific antibodies that block the nerve’s signal to the muscle.

Signs and Symptoms of Myasthenia Gravis

The presentation of MG has the following characteristics:

Who gets Myasthenia Gravis?

Myasthenia gravis occurs in all ethnic groups and both genders. It most commonly affects young adult women (under 40) and older men (over 60), but it can occur at any age.

Myasthenia gravis is not directly inherited nor is it contagious. Occasionally, the disease may occur in more than one member of the same family.

Because weakness is a common symptom of many other disorders, the diagnosis of myasthenia gravis is often missed or delayed (sometimes up to two years) in people who experience mild weakness or in those individuals whose weakness is restricted to only a few muscles.

The first steps of diagnosing myasthenia gravis include a review of the individual’s medical history, and physical and neurological examinations. The physician looks for impairment of eye movements or muscle weakness without any changes in the individual’s ability to feel things. If the doctor suspects myasthenia gravis, several tests are available to confirm the diagnosis.

What are Myasthenic Crises?

A myasthenic crisis occurs when the muscles that control breathing weaken to the point that ventilation is inadequate, creating a medical emergency and requiring a respirator for assisted ventilation. In individuals whose respiratory muscles are weak, crises—which generally call for immediate medical attention—may be triggered by infection, fever, or an adverse reaction to medication.

Although there’s no cure for myasthenia gravis in conventional treatments, treatments can help control the symptoms and improve muscle weakness.

Medication can be used to improve communication between the nerves and muscles, and to increase muscle strength.

Immunosuppressants are a type of medication used to improve muscle strength by controlling the production of abnormal antibodies.

Myasthenia Gravis is due to the faulty working of your immune system guided by genetic tendencies and other general factors. Myasthenia Gravis is a progressively deteriorating condition and requires treatment that can arrest or control the disease progression. The specially formulated Homeopathic treatment at Welling Clinics works on your immune system, reversing the damage and stopping the progression gradually over time.

For the best outcome, conventional allopathic treatment and Homeopathic speciality treatment from Welling Clinic for Myasthenia Gravis needs to be started together at the beginning and gradually our specialist will taper the allopathic steroid medicines.

Call +91 8080 850 950 to book an appointment or to consult and order online. Consult our specialists today for a detailed evaluation and to start your customised Homeopathy treatment of Myasthenia gravis.