Lichen Planus Treatment requires an experienced Homeopathic specialist who has needed skills to diagnose and has treated Lichen Planus completely. The Homeopathy treatment for Lichen Planus at Welling Clinics has been developed after exhaustive in-house research. Our clinics consult to more than 8400 patients of Lichen Planus globally, every year. You too can be benefitted from our expertise in treating Lichen Planus.

What is Lichen Planus? 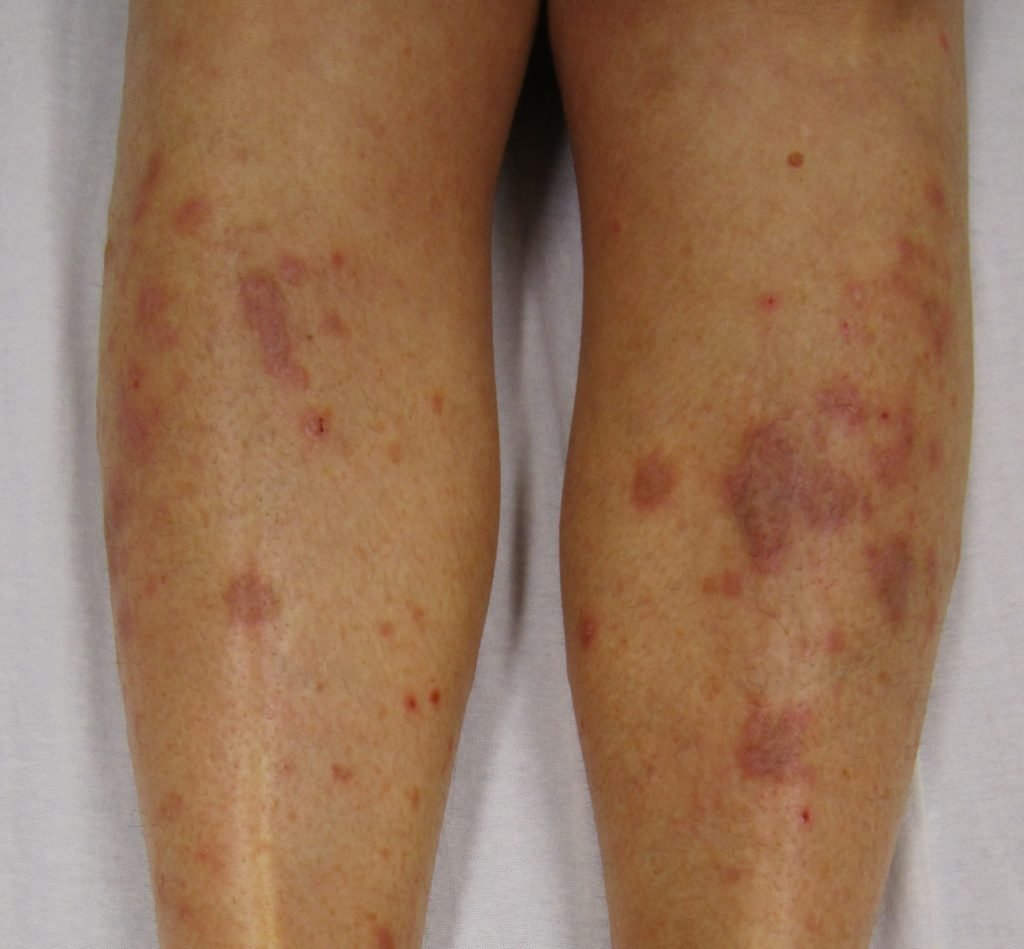 It is an autoimmune condition in which there is a chronic recurrent rash that is due to inflammation.

Rash is characterized by small, flat topped,many sided bumps that can grow together into rough,scaly plaques on the skin. Lichen Planus is a long standing (chronic), recurring, non-allergic, non-infectious, non-contagious disease of the skin, of which the exact cause is not yet fully understood. 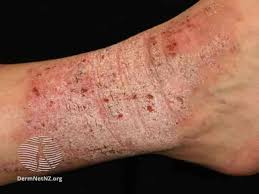 There may also be rash in the lining (mucous membrane) of mouth and vagina.

Females are more frequently affected as compared to male

Some drugs, such as those containing arsenic, bismuth, or gold, can produce an eruption which appears identical to lichen planus. Exposure to certain chemicals used in the development of color photographs can also produce a similar rash. The long-term use of the drugs quinacrine or quinidine(Quinidine Gluconate, Quinidine Sulfate), which is used for malaria, certain microscopic organisms, and worms, may produce hypertrophic lichen planus of the lower legs and other skin and body-wide (systemic) disturbances. Lichenoid eruptions can occur in graft-versus-host disease in people who have received bone marrow transplants. Tissue examination by a pathologist (biopsy) would be necessary distinguish lichenoid drug eruptions from classical lichen planus, which is not caused by medication. Of course, stopping the offending drug is associated with resolution of the eruption. 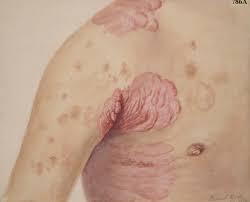 It can affect nails in about 10% of cases. The majority of nail changes results from damage to the nail matrix or nail root, Commonly two or three fingernails or toenails are involved. Nail changes are;

2.Lichen planus atrophicus-It presents as an annular area having atrophic,hyperigmented centre and active erythematous 1-2mm thick,raised border.usually seen on the face and dorsum of hands.

3.Lichen plano-pilaris– It manifests as itchy,violaceous papules present at the openings of hair follicles.It results in loss of hairs.Commonly seen on legs and arms.

4.Actinic lichen planus-In this annular grouped micropapular lesions are situated on the exposed parts of body like extensor sufaces of forearms and hands.They are aggravated on exposure to sunlight.

5.Linear lichen planus-In this lesions of are distributed in a linear fashion.

1.Biopsy-During a punch biopsy test there is removal of small section of skin which is then examined under a microscope for cell patterns characterstics of lichen planus.

3.Allergy test-To see any allergic reaction,which is a triggering factor for lichen planus.

Homeopathic medicines for Lichen Planus act on the body at the level of immunity and restore the deviated function. They also help to control the symptoms of Lichen Planus without any side effects. Welling Homeopathy treatment for Lichen Planus is a tried and tested protocol to offer long term relief and permanent cure gradually.

With continued treatment, you will notice, reduction in the patches and symptoms like itching and burning.

Click on the answers below for some common questions? Visit any Welling Clinic or chat with us for these questions and more.

How Long Does Lichen Planus Last?

Can Lichen Planus Be Cured?

How To Treat Lichen Planus Naturally

What is The Treatment for Lichen Sclerosus?

Does Lichen Planus Go Away?

How To Stop Lichen Planus From Spreading?

Lichen planus is a skin condition that is usually triggered by medications, genetics, or external factors like parasites or fungi. It may also be caused due to an improper immune response in the body.

There are various potential treatments available for lichen planus. Some of them include: CUREPlus Homeopathy treatment, Triamcinolone acetonide ointment, corticosteroids ointment, and oral steroids such as prednisone. Calcineurin inhibitor is also used for treatment. Other treatments include: antifungals, phototherapy, and intravenous immunoglobulin (IVIG).

How To Remove Lichen Planus Marks?

Lichen planus is a skin condition that can cause white or brown marks on your skin. These marks can be small and circular or long and thin. The circles or lines that make up the marks can have a scaly texture, like a tree bark.

To Remove Lichen Planus Marks , You Need To Understand The Causes.

Though The cause of lichen planus is not known. It may be caused by an allergy to something in the environment. This could include soaps, detergents, clothing, pet dander, mites or other substances you come into contact with every day.

Lichen Planus is a skin problem that causes white or brown spots on your skin. These marks can be small and circular or long and thin. The circles or lines that make up the marks can have a scaly texture, like a tree bark.

Having one of these patches of tissue growing on your body is not only ugly, but painful. Lichen planus marks can grow red and itchy, causing a lot of discomfort to the patient.

Lichen planus is not hereditary because it is caused by a variety of factors. Examples of the causes of lichen planus include an autoimmune response, emotional stress, and allergies. Lichen planus causes are often difficult to determine but there are some preventative measures that can be taken when trying to reduce the chance of developing lichen planus. These include avoiding spicy foods and using sunscreen on exposed skin surfaces.

What Is Lichen Planus Oral?

Oral lichen planus can be classified as a chronic leukoplakia that is almost always triggered by some event within the body. There are two general types of oral lichen planus – endemic and acquired. Endemic (primarily found in Africa, Asia, and Central America) occurs at an equal rate between sexes but has no known cause; a variety of allergens may play a role in its development. In contrast, acquired oral lichen planus is most common among older patients and typically shows up with irritation on the tongue or inside cheek tissue. It sometimes causes white or yellow lesions to form in any areas where dentures rub against the mouth lining which is why it affects older inhabitants more than others. Oral lichen planus can also occur as a result of an autoimmune disorder.

When the body perceives something foreign to the immune system, it responds by creating antibodies called immunoglobulins or IgE that bind to tissues and cause an overproduction of collagen in an effort to protect against the potential danger. Oral lichen planus is one such example.

Is Lichen Planus A Fungus?

No, Lichen planus is not a fungus.

Can Lichen Planus Pigmentosus Be Cured?

Lichen planus pigmentosus is a skin problem that mostly affects people of African and Asian descent.

It can be cured, but like most other autoimmune diseases it may take years to get rid of the problem and sometimes doctors do not know why it gets better. There are no really effective treatments for lichen planus pigmentosus. Steroid creams are usually used, which only control the inflammation and don’t cure the disease. Steroids can also have side effects, usually atrophy of the skin tissue, which means that it becomes thin and weak.

Welling Homeopathy treatment can treat lichen planus pigmentosus and cure it within 12-18 months.

Lichen Planus is an autoimmune disorder that can cause prolonged itching, rashes, blistering and lesions. Lichen Planus may worsen in response to sun exposure and the condition’s symptoms may vary.

Lichen Planus is not dangerous but it can be very uncomfortable and frustrating if you have to deal with it for a long time. Seek medical treatment as soon as possible if you experience any of the symptoms listed above and don’t suffer from any other diseases or illnesses that could cause similar symptoms.

What Is Lichen Planus Of The Scalp?

Lichen planus is a skin condition found on the scalp and it doesn’t have any symptoms. It can be very frustrating to have this disorder because people often mistake it for dandruff or other scalp conditions. Lichen planopilaris, on the other hand, causes many symptoms. One of the most notable is that it can cause hair loss as well as permanent scarring. Before you begin to panic about losing your hair, know that it’s a very slow process and only happens to less than 10 % of patients.

There are two main kinds of lichen planus also known as Lichen planopilaris; they’re both caused by autoimmune diseases such as Rheumatoid arthritis and Systemic lupus erythematous but neither disease has been proven to be directly connected with Lichen Planum. However, there is a strong link between lichen planopilaris and lichen planus. Both diseases target the skin, joints and mucous membranes of the eyes, mouth, lungs and gastrointestinal tract.

While there is no scientific evidence to suggest that scalp inflammation leads to hair loss most doctors believe that it could be caused by a severe allergic reaction between the scalp’s outermost layer called the stratum corneum or something in your diet causing an imbalance in steroid hormones which can cause permanent scarring leading to follicle death. This causes bald patches that can often grow back wavy or in different colours (depending on your location).

Does Oral Lichen Planus Go Away?

Can Lichen Planus Cause Cancer?

Does Lichen Planus Cause Cancer?

Can Lichen Planus Lead To Cancer?

What is Oral Lichen Planus?

How Is Oral Lichen Planus Diagnosis?

Is Lichen Planus Related To Psoriasis

Psoriasis is a skin condition that causes plaques to form on the skin. These plaques are usually red and scaly in appearance. It is thought to be a genetic disease that can be triggered by environmental factors. Psoriasis has a higher prevalence in people who have the atopic syndrome, an immune system disorder characterized by asthma, eczema, or hay fever

Lichen planus is a chronic skin inflammatory disease that affects the topmost layers of the skin. Lichen planus also typically causes itching and it is most common among people ages 40 to 70 years old. This disease can also cause pain, but it does not usually cause scaly patches like psoriasis does.

Call 8080 850950 to know more about our specially formulated Homeopathy treatment for lichen planus.