The Welling Homeopathy treatment can help you get faster relief from symptoms which include pain and stiffness in your lower back and hips, neck pain and fatigue. 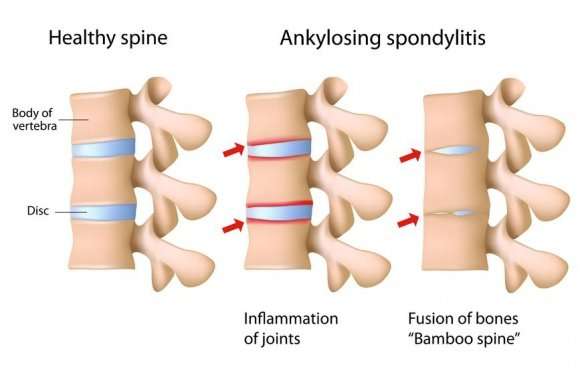 What is Ankylosing Spondylitis?

Ankylosing spondylitis is an inflammatory disease that can cause some of the vertebrae in your spine to fuse together. This fusing makes the spine less flexible and can result in a hunched-forward posture. If ribs are affected, it may be difficult to breathe deeply. It is a chronic inflammatory disease of the axial skeleton, with variable involvement of peripheral joints and nonarticular structures causing swelling between your vertebrae and in the joints between your spine and pelvis.

Although it can occur at any age, spondylitis most often strikes men in their teens and 20s.

It is an auto immune disorder.

Who is At Risk?

The risk factors that predispose a person to ankylosing spondylitis include:

Unlike other forms of arthritis and rheumatic diseases, general onset of AS commonly occurs in younger people, between the ages of 17-45. However, it can affect children and those who are much older. AS is more common in men, but occurs in women as well.

However, the HLA-B27 gene appears only to increase the tendency of developing ankylosing spondylitis, while some additional factor(s), perhaps environmental, are necessary for the disease to appear or become expressed.

Scientists suspect that other genes, along with a triggering environmental factor, such as a bacterial infection, are needed to trigger AS in susceptible people.

The x-rays are supposed to show erosion typical of sacroiliitis. Sacroiliitis is the inflammation of the sacroiliac joints. However, it may be several years before these signs appear.

A magnetic resonance imaging (MRI) scan may highlight changes in your sacroiliac joints that might not show up on an X-ray. It may also show any inflammation of ligaments in the spinal region.

Bamboo spine is a radiographic feature seen in ankylosing spondylitis that occurs as a result of vertebral body fusion. It is often accompanied by fusion of the posterior vertebral elements as well and resembles a bamboo stem…therefore the term bamboo spine.

A blood test can show if there’s inflammation in the body, but only if the condition is in an active phase

NSAIDs (nonsteroidal anti-inflammatory drugs) are still the cornerstone of treatment and the first stage of medication in treating the pain and stiffness associated with AS.

Examples of NSAIDs include ibuprofen, naproxen and diclofenac.

They work to decrease pain and inflammation, to reduce or prevent joint damage, and to preserve the structure and function of the joints.

This group of medications include: Sulfasalazine, Methotrexate and Corticosteroids.

Discontinuing a DMARD may reactivate disease or cause a “rebound flare”, with no assurance that disease control will be reestablished upon resumption of the medication.

If your symptoms cannot be controlled using painkillers or exercising and stretching, anti-TNF (tumors necrosis factor) medication may be recommended. TNF is a chemical produced by cells when tissue is inflamed.

The two types of surgical treatment that are sometimes needed by people with AS are:

Homoeopathy treats the person as whole. It focuses on patient as a person as well as pathological condition. A Remedy is selected after full indivualizing examination and case anaylsis which includes medical history of patient, physical and mental constitution etc.

Rigidity of nape of neck. Pressure on shoulders. Swelling of neck. Engorgement of axillary glands and of those of nape of neck and of neck. Paralyses sensation in upper sacrum and lower lumbar vertebrae. Contusive pain in loins and back (as if back were broken), especially after having been seated a long time Sensitiveness of spinous processes of dorsal vertebrae to pressure. Softening of spine. Heat or burning in back, between scapula.

Stiffness of nape, with headache. Swelling of glands of nape, in the neck, and under the axillae (with suppuration), sometimes with indurations…Stitches between the hips.Coccyx painful, as after a long carriage ride.- Stinging in os coccyx on rising, painful to pressure. -Scabby elevation on coccyx, above fissure of nates- Inflammatory abscess in lumbar region (on the psoas muscle).- Weakness and paralytic stiffness in back, loins, and nape.- Burning in back when walking in open air and becoming warm.- Aching, shooting, burning, and throbbing in lumbo-sacral region.- Swelling and distortion of spine (curvature of the vertebrae).-Contusive pain between the shoulder-blades.

Serious or advanced rheumatism with marked stiffness. Rheumatism with stiffness or spasms of the chest wall. Severe spasm or tearing pains. Pains also described as “paralytic.” An important remedy in ankylosing spondylitis. Wandering arthritis; moving spot to spot from one week to next. Worse: Night. Morning in bed. Hip pain worse rising from a seat or from walking. Chest wall pain and spasm worse first motion and inspiring. Better: Motion. Location: Wandering arthritis. Back. Chest and ribs. Hip. .

Stiffness of neck, in nape, with paralytic, sprained pain. Child cannot hold head up neck muscles so weak. Tetters on nape. Swelling and inflammation of glands of nape and of neck.Swelling and suppuration of axillary glands. Cracking in vertebrae of neck, especially on bending backwards. Weakness and wrenching pains, or pain as from a bruise in loins, coccyx, and in back, especially on walking, or rising from a seat. Gnawing pain in small of back. Vertebrae softened. Cracking of vertebrae on bending head backward.

Get the Welling Advantage

Specially formulated homeopathic treatment to help you recover completely,reverse any damage and relieve pain. Get started today to prevent more damage. Call (+91) 80 80 850 950 to book an appointment in Mumbai.