Call +91 8080 850 950 to book an appointment or to consult and order online. Consult our specialists today for a detailed evaluation and to start your customised Homeopathy medicines for Chronic Bronchitis. 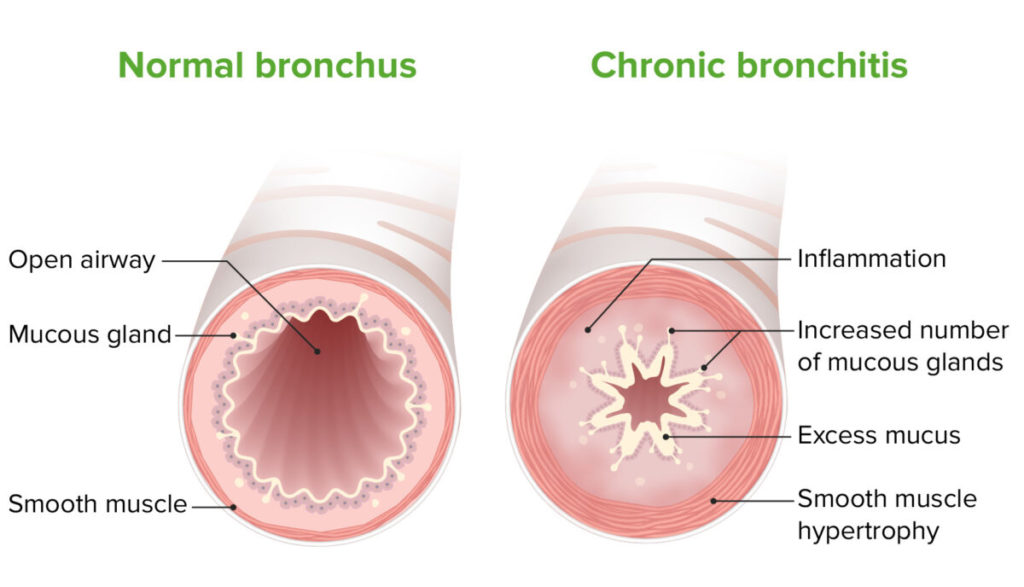 What is Chronic Bronchitis?

Chronic bronchitis is a persistent, serious lung disease that requires ongoing medical care and can lead to gradual deterioration of the lungs. Many people with chronic bronchitis also develop another respiratory disease called emphysema.

Chronic bronchitis involves the restriction of airflow in the air passages that worsens over time. This causes increasing difficulty in breathing and more sputum (mucus) production in the lungs.

Smoking is the major cause of chronic bronchitis – smoking causes paralysis of cilia which are important to keep germs and irritants out of the lungs. If cilia are damaged mucus gets trapped in lungs. This causes the walls of the bronchial tubes to become irritated, swell, and narrow. The bronchial tubes also become less able to expand when the body needs more oxygen. Mucus stuck in the smaller passages causes stale air to be trapped instead of exhaled. This leads to difficulty breathing

Exposure to occupational or environmental irritants can cause chronic bronchitis. Irritants may include:

The symptoms of chronic bronchitis are:

Specially formulated Homeopathy treatment for bronchitis has been proven to be immensely effective in relieving continuous cough, treating the recurrent cold and cough, improving your immunity and general health, reducing the severity & frequency in case of chronic bronchitis.

Belladonna suits cases of bronchitis with a violent fever, short, dry, continual, distressing cough, worse at night and on lying down, where the breathing is irregular and hurried, no expectoration, or, if present, it is apt to be blood streaked, fullness in chest without any pain, though children will cry when coughing, the skin is hot and inclined to moisture. There is a tendency to drowsiness, the patient does not sleep, but dozes in semiconscious manner and starts frequently.

Especially suitable to sub-acute and lingering cases. There is a paroxysmal cough with pain under the sternum, suffocative pressure in the upper part of the chest with constriction of the larynx, hoarseness, mucous rales,bloody and mucous sputum or purulent, having a salty or sweetish taste; patient better after sleep. The respiration is embarrassed and the tendency is toward pneumonia

The sovereign remedy in inflammatory bronchial catarrh; there is roughness and soreness from the fauces down through the middle of the chest, a dry, raw concussive cough, which is very exhausting ;sputum watery, saliva-like, or yellow and muco-purulent. There is fever and alternation of hills and heat, desire for cold drinks, which aggravate the cough. and pasty sweat without relief. The expectoration may also be of bluish lumps, and the cough is especially troublesome towards morning, the tightness seems to be at the epigastrium.

Call +91 8080 850 950 to book an appointment or to consult and order online. Consult our specialists today for a detailed evaluation and to start your customised Homeopathy treatment of Chronic Bronchitis.