Treatment for COPD at Welling Clinic includes our specially formulated Homeopathy medicine for COPD. The treatment process has been developed after exhaustive in-house research. Our clinics consult for more than 12000 patients of COPD globally, every year. You too can be benefitted from our expertise in the treatment of COPD.

Don’t wait for complications, call +91 8080 850 950 to book an appointment or to consult and order online. Consult our specialists today for a detailed evaluation and to start your customised Homeopathy medicines for COPD. 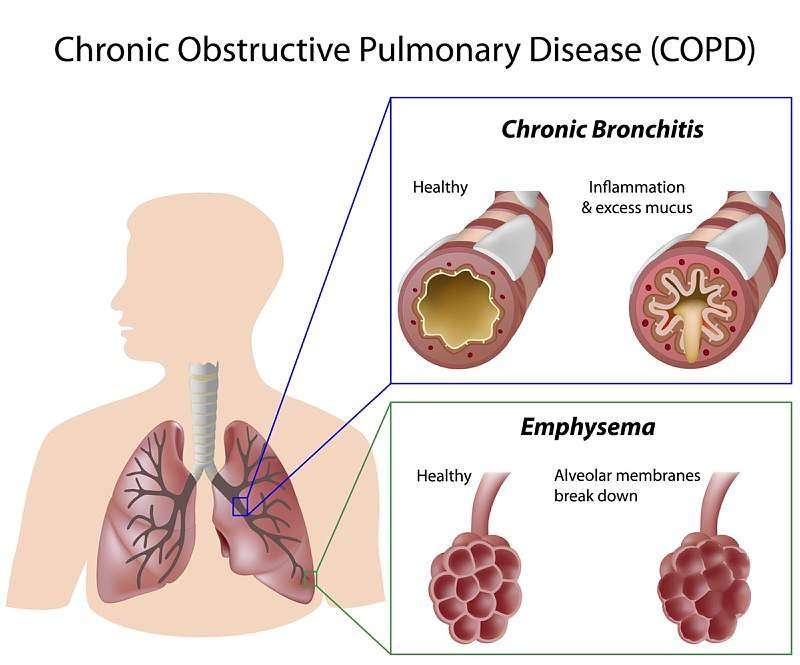 COPD or chronic obstructive pulmonary disease, is a progressive disease that makes it hard to breathe. “Progressive” means the disease gets worse over time.

1. COPD is a lung disorder that can make it difficult to breathe

2. Smoking or exposure to smoke and other harmful gases are usually the cause

3. The airways in the lungs are narrowed due to inflammation or scarring of the lung tissue- this makes it hard for air to move in and out of the lungs

COPD is most often caused by smoking. Most people with COPD are long-term smokers, and research shows that smoking cigarettes increases the risk of getting COPD

COPD is often a mix of two diseases: Chronic Bronchitis and emphysema. Both of these diseases are caused by smoking. Although you can have chronic bronchitis or emphysema, people more often have a mixture of both diseases.

Other possible causes of COPD include:

The most common symptoms of COPD are sputum production, shortness of breath and a productive cough. These symptoms are present for a prolonged period of time and typically worsen over time.

·       Exacerbation: An acute exacerbation of COPD is defined as increased shortness of breath, increased sputum production, a change in the color of the sputum from clear to green or yellow, or an increase in cough in someone with COPD. This may present with signs of increased work of breathing such as fast breathing, a fast heart rate, and sweating, active use of muscles in the neck, a bluish tinge to the skin, and confusion or combative behavior in very severe exacerbations. Crackles may also be heard over the lungs on examination with a stethoscope.

There are two different types of COPD- chronic and acute. Chronic COPD is more common, and it develops slowly over years. Acute COPD is less common and usually occurs after an event like a lung infection or injury to the lungs.

The symptoms of COPD vary from person to person. The most common ones are: shortness of breath; wheezing; feeling out of breath all the time; a cough that won’t go away; seeing blood in sputum (sputum is the liquid that you spit out when coughing) or foamy mucus.

People with COPD also often have a condition called cor pulmonale- this is when the right side of the heart has to work harder because blood isn’t flowing out of the lungs as it should be. This usually happens in people who have long-term (chronic) COPD and it can lead to right-sided heart failure.

COPD is usually diagnosed by a doctor after looking at your symptoms and doing tests like spirometry (to check how well the lungs are working) and lung function tests to see how much oxygen is in the blood. It can be hard for doctors to diagnose COPD because it shares some of its symptoms with other lung conditions like asthma.

COPD can be difficult to treat and it is important that you follow your doctor’s treatment plan. Treatment often includes pulmonary rehabilitation (a programme of exercise and counselling) along with medications, such as bronchodilators, corticosteroids, inhaled antibiotics or oxygen therapy.

If any patient is at risk for COPD or have symptoms of COPD, the patient should be tested through spirometry. Spirometry is a simple test of how well our lungs work. For this test, if one blow air into a mouthpiece and tubing attached to a small machine the machine measures the amount of air you blow out and how fast you can blow it. 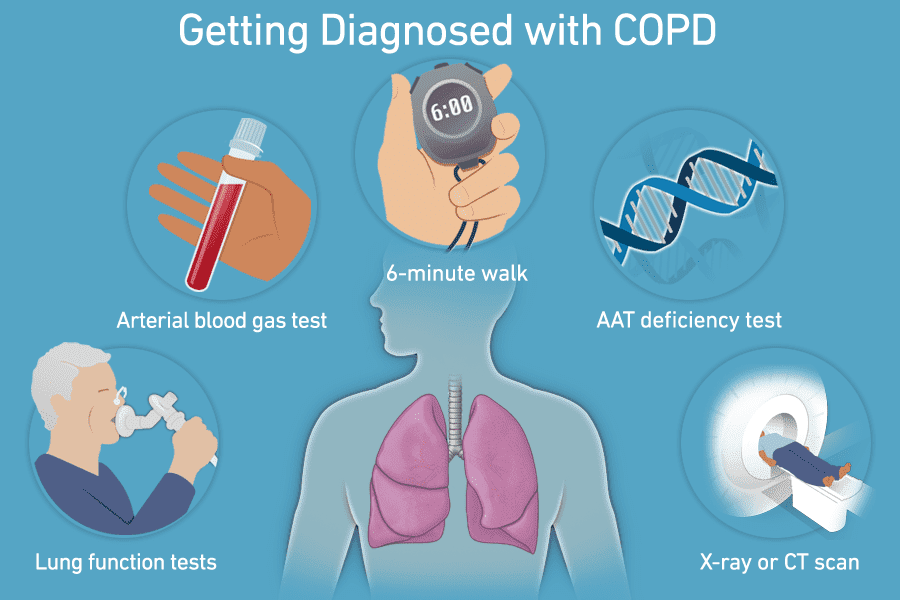 The doctor will also ask for a complete health history and do a health exam.

They may also want you to have a chest x-ray and/or other tests, like an arterial blood gas test.

There is no cure for COPD. Treatment can help relieve your symptoms and slow the progression of the disease. The main goals of COPD treatment are to:

The first and most important thing you should do is quit smoking, and avoid starting if you don’t smoke. You should also reduce the air pollution in your environment as much as possible. Avoid secondhand smoke and stay away from places with dust, fumes, and other toxic substances you might inhale.

It is also important to eat a healthy diet. The fatigue and breathing difficulty of COPD might make it difficult to eat. Smaller, more frequent meals might help. Your doctor might suggest vitamin and mineral supplements. It might also be helpful to rest before meals.

Exercise is important but may be difficult for some. Physical activity can strengthen the muscles that help you breathe. Talk to your doctor about the physical activities that are right for you.

Medications: A variety of medications might be used to treat the symptoms of COPD.

Bronchodilators usually come in an inhaler form. Inhalers deliver the medication directly to your lungs and airways. These medications help to open constricted (narrowed) airways so you can breathe easier. There are two classes of bronchodilators: β-agonists and anticholinergics.

The short-acting β-agonists are often referred to as “rescue inhalers” because they can be used to swiftly improve breathing during a COPD flare-up.

Long-acting β-agonists, which are used twice a day, are part of maintenance therapy.

Corticosteroids, such as prednisone, reduce irritation and swelling in the airway. They are particularly effective if you have been exposed to an infection or an irritant such as secondhand smoke, extreme temperatures, or harsh fumes. Corticosteroids may be delivered by inhaler, nebulizer, tablet, or injection.

Corticosteroids are associated with many unpleasant side effects. These may include weight gain, water retention, weakening of the bones, and a depressed immune system. For this reason, they are primarily used during a severe flare-up or exacerbation of COPD symptoms. They may also be used late in the disease process if you are troubled by shortness of breath and if bronchodilators alone are not helpful.

Respiratory infections can make the symptoms of COPD worse. If you have an infection, which is often the case when symptoms suddenly worsen, your doctor may prescribe antibiotics. Antibiotics kill bacteria. They do not kill viruses. Your doctor may do tests to determine exactly what type of infection you have and what antibiotic will be most effective. Antibiotics should be used only when needed.

Quitting smoking can improve your health and your quality of life with or without COPD. As nicotine is highly addictive, many doctors offer patients nicotine replacement therapy to ease their cravings for cigarettes. Nicotine replacement treatments may come in gums, patches, and even inhalers. Some antidepressants have been clinically proven to reduce or eliminate smoking, but people should be aware of side effects. If your doctor prescribes medication, be sure to ask about the side effects.

As COPD progresses and you have a harder time getting the air you need into your lungs, you may be overcome with anxiety. Anxiolytic medications such as diazepam (Valium) and alprazolam (Xanax) have been shown to calm patients in the late and terminal stages of COPD, thus producing an improved quality of life.

Opioids, also known as narcotic medications or painkillers, work by depressing the central nervous system. This decreases your need for oxygen and eases that feeling of “air hunger,” the distress signal your brain sends when it is not getting enough oxygen.

Opioids are most commonly given as a liquid and absorbed through the membranes in your mouth.

Because opioids can be addictive and can suppress breathing, they are usually used only during the late and terminal stages of COPD, often when you have decided that you want no further aggressive or life-prolonging treatment.

Throughout the course of COPD, several drugs have shown themselves to be effective in lessening distressing symptoms, slowing disease progression, improving quality of life, and even extending life.

Homeopathy is one of the most popular holistic systems of medicine. The selection of remedy is based upon the theory of individualization and symptoms similarity by using holistic approach. This is the only way through which a state of complete health can be regained by removing all the sign and symptoms from which the patient is suffering. The aim of homeopathy is not only to treat COPD symptoms but to address its underlying cause and individual susceptibility. As far as therapeutic medication is concerned, several medicines are available for COPD symptoms treatment that can be selected on the basis of cause, sensation, modalities of the complaints.

A few of the indicated medicines for COPD are:

1) Bryonia alba: Cough dry as if coming from the stomach with stitches in side of chest. rest, lying on painful side, pressure. Thirst for large quantities of water at long intervals. Constipation, dry, hard stool Irritable temperament.

These are a few of the Homeopathic medicines which form part of our specially formulated treatment for COPD.

Don’t wait for complications, call +91 8080 850 950 to book an appointment or to consult and order online. Consult our specialists today for a detailed evaluation and to start your customized Homeopathy treatment of COPD.