See our specialists at any Welling Clinic in India or order online instantly from the link above.

Call +91 8080 850 950 to book an appointment or to consult and order online. Consult our specialists today for a detailed evaluation and to start your customised Homeopathy medicines for Endometriosis. 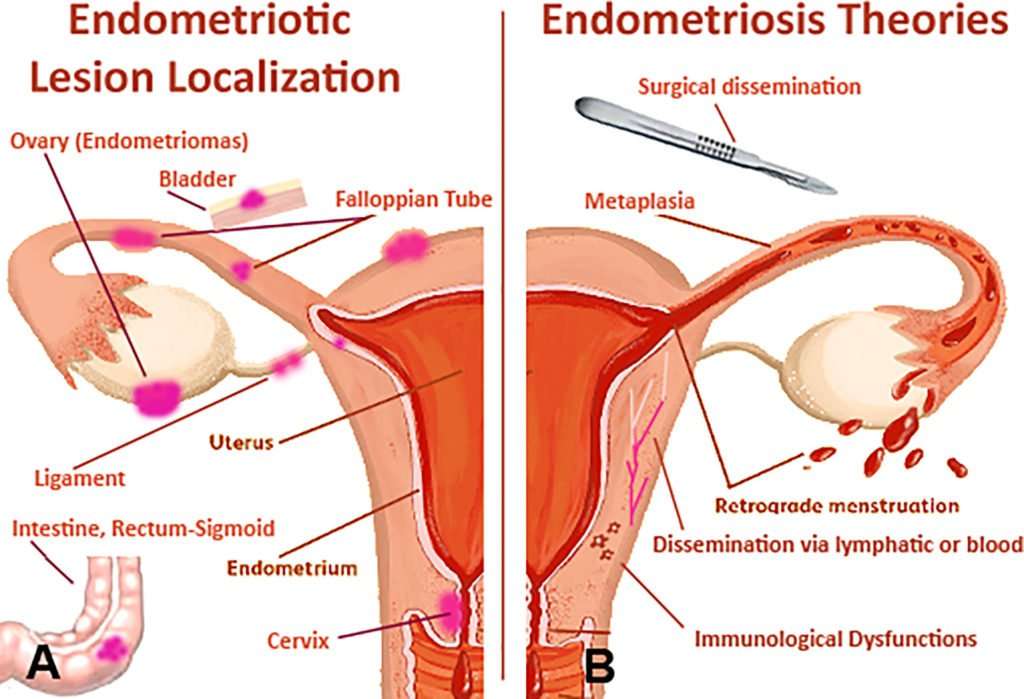 Aashaya Mahendra, India
I started my treatment for endometriosis through online consultation and later visited the clinic. Majority of my health problems related to endometriosis got resolved in 4 months and I was pain-free within 8 months. Doctors here declared me completely cured of endometriosis in 11 months and i was off any treatment.

The endometrium is the tissue that lines the inside of the womb (uterus).

Endometriosis is the abnormal growth of cells (endometrial cells) similar to those that form the inside or lining the tissue of the uterus but in a location outside of the uterus.

Endometrial cells are the lining cells of the uterus and are cells that are shed each month during menstruation.

Endometriosis occurs when cells like the lining of the uterus grow in or on tissues outside the uterus; these areas are called endometriosis implants.

These implants are most commonly found on the ovaries, the Fallopian tubes, outer surfaces of the uterus or intestines, and on the surface lining of the pelvic cavity. They can also be found in the vagina, cervix, and bladder, although less commonly than other locations in the pelvis.

Rarely, endometriosis implants can occur outside the pelvis, on the liver, in old surgery scars, and even in or around the lung or brain.

Endometrial implants, while they can cause problems, are benign (not cancerous).

Leena G.S, US.
I heard about you from my friend here in Chicago. I was troubled by endometriosis for 12 years. I consulted your doctor in early 2017. I was completely pain-free within 4 months. I conceived in 7 months of starting your treatment

Currently the exact cause of endometriosis is unknown. Most experts agree that there are many responsible factors, possibly including genetic, immunological, and hormonal reasons. But following theories are been proposed:

Afiya Humranwala, India
I was cured of endometriosis in 13 months and all thanks to you all doctors at Welling I am back to my routine jogging and sports.

Patches of endometriosis can vary in size from the size of a pinhead to large clumps. Many women with endometriosis have no symptoms. If symptoms develop they can vary, and include those listed below.

Vikram Singh, Rajasthan, India
I and my wife started the treatment of infertility. My wife suffered from endometriosis and it was difficult for her to conceive. We even tried IVF, which failed, So we turned to Welling Homeopathy Clinic. The pains reduced within the first month and the regular treatment continued for the next 5 months when I got the pleasant news of my wife conceiving. Thank you .

Complications sometimes occur in women with severe untreated endometriosis. For example, large patches of endometriosis can sometimes cause a blockage (obstruction) of the bowel or of the tube from the kidney to the bladder (the ureter).

Once the endometriosis has gone with treatment, it may recur again in the future. Further treatment may need to be considered if symptoms recur.

How is Endometriosis Diagnosed?

Surgically, endometriosis can be staged I–IV (Revised Classification of the American Society of Reproductive Medicine). The process is a complex point system that assesses lesions and adhesions in the pelvic organs, but it is important to note staging assesses physical disease only, not the level of pain or infertility. A person with Stage I endometriosis may have little disease and severe pain, while a person with Stage IV endometriosis may have severe disease and no pain or vice versa. In principle the various stages show these findings:

In addition, some deep lesions are present in the cul-de-sac

As above, plus presence of endometriomas on the ovary and more adhesions.

As above, plus large endometriomas, extensive adhesions.

Endometrioma on the ovary of any significant size (Approx. 2 cm +) must be removed surgically because hormonal treatment alone will not remove the full endometrioma cyst, which can progress to acute pain from the rupturing of the cyst and internal bleeding.

Homeopathic remedies are prescribed by symptoms rather than conditions, as each case of a particular illness can manifest differently in different people.

Homeopathy is one of the most popular holistic systems of medicine. The selection of remedy is based upon the theory of individualization and symptoms similarity by using holistic approach.

This is the only way through which a state of complete health can be regained by removing all the sign and symptoms from which the patient is suffering.

The aim of homeopathy is not only to treat endometriosis but to address its underlying cause and individual susceptibility.

As far as therapeutic medication is concerned, several remedies are available to treat endometriosis that can be selected on the basis of cause, sensations and modalities of the complaints.

For individualized remedy selection and treatment, the patient should consult a qualified homeopathic doctor in person. There are following remedies which are helpful in the treatment of endometriosis:

Homeopathy is a holistic treatment; therefore the homeopathic medicine not only treats fibroid but also improves overall health.

Can Endometriosis Cause Cancer?

Yes Ovarian cancer occurs at higher than expected rates in women with endometriosis, Since endometriosis is the reason for infertility in 50% of women who cannot conceive, the explanation may have something to do with the lack of having children. Conceiving and giving birth is known to offer some protection against ovarian cancer. The scientist discovered that the risk for cancer among women with endometriosis was elevated by 90% for ovarian cancer, 40% for hematopoietic cancer (primarily non-Hodgkin’s lymphoma), and 30% for breast cancer.

Estrogen stimulates cell division in the ovaries, breasts and uterus. Over time, those constantly dividing cells might make a mistake, leading to cells dividing uncontrollably, i.e., a cancer. Endometriosis, on the other hand, is the presence elsewhere in the body of tissue that normally lines the uterus. This tissue also grows in response to estrogen, and the disease itself is dependent on the presence of estrogen.

Can Endometriosis Go Away?

For most women, endometriosis recedes with menopause. Some women find relief from endometriosis during pregnancy. In some cases, symptoms may simply go away. About one-third of women with mild endometriosis will find that their symptoms resolve on their own.

yes -It is a benign but it is locally invasive, disseminates widely. Cyclic hormones stimulate growth. Symptoms are not related with extent of lesion.Even when the endometriosis is widespread,there may not be any symptom; conversely, there may be intense symptoms with minimal endometriosis.

Can Endometriosis Cause Backpain?

Yes – back pain, leg & hip pain, acid reflux, chronic fatigue, and many other symptoms that don’t appear to be related to the pelvic area may be due to nerve damage, inflammation, lesions, and/or adhesions that are adjacent to the spinal cord. When endometriosis infiltrates nerves near to the spinal cord, for example, it can cause radiating pain throughout the region.

Surgically removing endometriosis from this and other nerves can help reduce these symptoms. However, only the most advanced laparoscopic surgeons can remove endometriosis from nerves minimally invasively without causing complications

Can Endometriosis Cause Nausea?

Yes , The liver is our filter and would pick up any particles that weren’t ideal for the body and flush them away, through our digestive system. The trouble occurs however when the liver is being overworked and doesn’t have enough capacity to process all the toxins that come through. This generally occurs because there is a backlog of toxins, which the liver has to process.so yes endometriosis has indirect way of causing nausea especially during menstrual periods which might be linked with liver having stress of overwork.

Can Endometriosis Be Fatal?

Sometimes the endometrial cells create cysts that can rupture and bleed. The process sounds a bit like cancer, but endometriosis isn’t cancer. However, it may very slightly increase the risk of getting certain cancers. Endometriosis isn’t a fatal disease but can be widespread.

Can endometriosis cause anemia?

Chronic blood loss canalso be due to endometriosis. One of those facts is that the Endometriosis implants/lesions shed (or bleed) inside the pelvic cavity (or wherever else the Endo is located).  Another fact is that women with Endometriosis tend to have much longer and heavier periods than women who do not suffer from Endo. so mostly Iron –deficiency anemia chances are high.

Can endometriosis cause leg pain?

Can endometriosis cause fever ?

Surely it has not yet proved but R. Holmes reported 80 cases of endometriosis of which seven, or 8.7 per cent, had a temperature elevation and leukocytosis. Jeffcoate9 in 1947 reported 8 instances of fever occurring in 91 cases of proved endometriosis which were operated upon.

Can endometriosis cause bleeding?

Yes, Rectal bleeding and haematuria during menstruation may occur in women with infiltrating rectosigmoidal and bladder endometriosis, respectively. Hemoptysis (rarely)

Can endometriosis cause fatigue?

As a matter of fact the symptoms often associated with endometriosis such as chronic fatigue, allergy, emaciation and poor complexion are not caused directly by endometriosis but are signs of liver disorders. A better alternative however is to strengthen the liver so that it can more efficiently inactivate and remove estrogen.

Can endometriosis cause hair loss?

Endometriosis is a biological disorder that mostly affects women between the ages of 25 and 35. It is believed endometriosis and hair loss are indirectly linked through hormones, stress and medication. Lastly, there are some medications used to treat endometriosis that list hair loss as a side effect. Danocrine, or Danazol is a progestogen which can lead to masculinised traits, including increased facial and body hair, and thinning hair or hair loss. Lupron is another medication suggested for the treatment of endometriosis, but it can induce hair loss and slow down the regular growth of hair in a woman.

Can endometriosis be cured?

Endometriosis can be completely cured with Welling Homeopathy. The treatment can help with pain and infertility. Treatment depends on how severe your symptoms are and whether you want to get pregnant. Also good scope of homoeopathy in hormonal disorders.

Can endometriosis cause bladder pain?

Endometrial tissue present in the rectum or urinary tract can cause an obstruction. Endometriosis affecting the bladder is rare and the exact cause is unknown. Bladder irritation, Bladder urgency (the need to pass urine),Pain when the bladder is full, Occasional blood in the urine during a period.In some cases, loin pain in the area of the kidneys

Can endometriosis cause depression?

Research studies have highlighted the influence CPP can have on patients’ quality of life and psychological well-being. The use of hormonal therapies such as gonadotropin-releasing hormone agonists (GnRH) are effective at reducing endometriosis symptoms, but they are often associated with anxiety and depression.

Can endometriosis cause infertility?

Can I get pregnant with endometriosis?

It’s important to know that, with treatment, the majority of women with endometriosis and infertility issues eventually do become pregnant. Studies find that about 21 to 44 percent of infertile women have endometriosis, but only 4 to 22 percent of fertile women.It also doesn’t mean you won’t or can’t get pregnant.

Homeopathic Treatment for Endometriosis in Mumbai

We have 6 Homeopathy clinics in Mumbai, with experienced Homeopathy specialist to offer you detailed evaluation and our speciality homeopathy treatment for endometriosis.

Homeopathic Treatment for Endometriosis in Surat

We have a Homeopathy clinic in Adajana, Surat, with Senior Homeopathy specialist, trained at our Mumbai Clinic under Dr.Welling,M.D. to offer you detailed evaluation and our speciality homeopathy treatment for endometriosis.

Call +91 8080 850 950 to book an appointment or to consult and order online. Consult our specialists today for a detailed evaluation and to start your customised Homeopathy treatment of Endometriosis.