Homeopathy treatment of Treatment of Grave’s Disease at Welling Homeopathy Clinics can help you get cured of Grave’s disease including eye symptoms like protruding of eye balls.

Call +91 8080 850 950 and consult our specialist to get cured of Grave’s disease completely without hormonal medicines.

Call our specialist today for a detailed assessment today. The earlier you start the treatment faster you will recover from Grave’s Disease.

What is Graves’ disease? 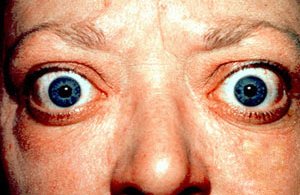 Thyroid hormones affect many body systems, so signs and symptoms of Graves’ disease can be wide ranging. Although Graves’ disease may affect anyone, it’s more common among women and in people younger than age 40.

Hormones secreted by the thyroid gland control metabolism , or the speed at which the body converts food into energy. Metabolism is directly linked to the amount of hormones that circulate in the bloodstream. If, for some reason, the thyroid gland secretes too much of these hormones, the body’s metabolism kicks into high gear, causing a pounding heart , sweating, trembling, and weight loss.

Normally, the thyroid gets its production orders through another chemical called thyroid-stimulating hormone (TSH), released by the pituitary gland in the brain . But in Graves’ disease, a malfunction in the body’s immune system releases abnormal antibodies that act like TSH. Spurred by these false signals to produce, the thyroid’s hormone factories work overtime and overproduce.

Exactly why the immune system begins to produce these troublesome antibodies isn’t clear. Heredity and other characteristics seem to play a role. Studies show, for example, that if one identical twin contracts Graves’ disease, there is a 20% likelihood that the other twin will get it too. Also, women are more likely than men to develop the disease. And smokers who develop Graves’ disease are more prone to eye problems than nonsmokers with the disease. No single gene causes Graves’ disease. It is thought to be triggered by both genetics and environmental factors.

Who Is at Risk for Graves’ Disease?

The disease is typically found in people younger than 40. Your risk also increases significantly if family members have Graves’ disease. Women develop it seven to eight times more frequently than men.

Since Graves’ disease is an autoimmune disease which appears suddenly, often later in life, a viral

or bacterial infection may trigger antibodies which cross-react with the human TSH receptor, a phenomenon known as antigenic mimicry The bacterium Yersinia enterocolitica bears structural similarity with the human thyrotropin receptor and was hypothesized to contribute to the development of thyroid autoimmunity arising for other reasons in genetically susceptible individuals.

In the 1990s, it was suggested that Y. enterocolitica may be an associated condition with both diseases having a shared inherited susceptibility.

More recently, the role for Y. enterocolitica has been disputed.

The overproduction of thyroid hormones can have a variety of effects on the body.

The inheritance pattern of Graves disease is unclear because many genetic and environmental factors appear to be involved. However, the condition can cluster in families, and having a close relative with Graves disease or another autoimmune disorder likely increases a person’s risk of developing the condition.

Eye complications A small percentage of all Graves’ patients will develop a condition called ophthalmopathy in which your eye muscles and tissues become swollen. This can cause exophthalmos — your eyeballs protrude from their sockets — and is considered a hallmark of Graves’ disease, even though it’s rare. But having this complication doesn’t have anything to do with how severe your Graves’ disease is. In fact, it isn’t clear whether such eye complications stem from Graves’ disease itself or from a totally separate, but closely linked, disorder. If you have developed ophthalmopathy, your eyes may ache and feel dry and irritated. Protruding eyeballs are prone to excessive tearing and redness, partly because the eyelids can’t protect them as well.

Although anyone can develop Graves’ disease, many factors can increase the risk of disease, including:

Because a family history of Graves’ disease is a known risk factor, there is likely a gene or genes that can make a person more susceptible to the disorder.

Women are much more likely to develop Graves’ disease than are men.

People with other disorders of the immune system, such as type 1 diabetes or rheumatoid arthritis, have an increased risk.

Stressful life events or illness may act as a trigger for the onset of Graves’ disease among people who have genes that increase their risk.

Pregnancy or recent childbirth may increase the risk of the disorder, particularly among women who have genes that increase their risk.

Cigarette smoking, which can affect the immune system, increases the risk of Graves’ disease. Smokers who have Graves’ disease are also at increased risk of developing Graves’ ophthalmopathy.

The primary treatment goals are to reduce the amount of thyroid hormones that the body produces and lessen the severity of symptoms. Medicines called beta-blockers are often used to treat symptoms of rapid heart rate, sweating, and anxiety until the hyperthyroidism is controlled.

Hyperthyroidism is treated with one or more of the following:

Antithyroid medicines can block or change how the thyroid gland uses iodine. These may be used to control the overactive thyroid gland before surgery or radioiodine therapy or as a long-term treatment.

Radioiodine therapy in which radioactive iodine is given by mouth. It then concentrates in the overactive thyroid tissue and causes damage.

Surgery may be done to remove the thyroid.

If you have had radioactive iodine treatment or surgery, you will need to take replacement thyroid hormones for the rest of your life. This is because these treatments destroy or remove the gland.

Some of the eye problems related to Graves disease often improve after treatment with medicines, radiation, or surgery to treat the overactive thyroid. Radioiodine therapy can sometimes make eye problems worse. Eye problems are worse in people who smoke, even after the hyperthyroidism is treated.

Sometimes, prednisone (a steroid medication that suppresses the immune system) is needed to reduce eye irritation and swelling.

You may need to tape your eyes closed at night to prevent drying. Sunglasses and eye drops may reduce eye irritation. In rare cases, surgery or radiation therapy (different from radioactive iodine) may be needed to prevent further damage to the eye and loss of vision.

The treatment can help you recover from all symptoms of graves disease including eye symptoms. Meet our specialist for a detailed assessment and to understand more about our treatment for Grave’s disease.