The customized homeopathic medicines can help you in your fight against Multiple myeloma. You can continue our Homeopathy medicines as a stand-alone therapy or along with other treatments for Multiple myeloma without any interference.

Consult Mumbai’s leading Homeopathic cancer specialist Dr. Sourabh Welling, M.D. for a detailed evaluation and to know if our treatment can help you, as the treatment outcome can vary with the stage of illness, age, past treatments & their side-effects, and current health status. 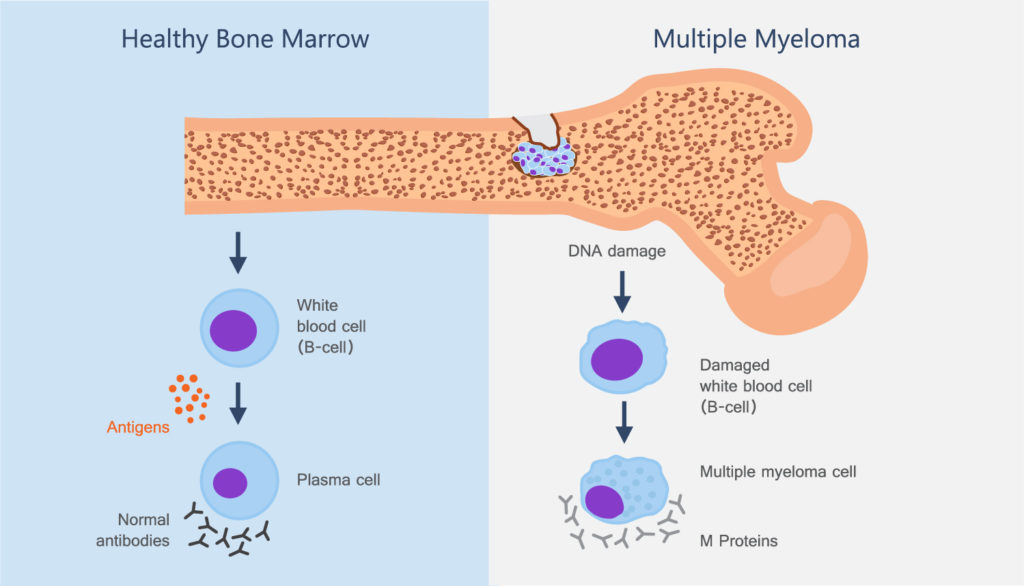 Multiple myeloma causes cancer cells to accumulate in the bone marrow, where they crowd out healthy blood cells. Rather than produce helpful antibodies, the cancer cells produce abnormal proteins that can cause kidney problems.

What is Multiple Myeloma

Multiple myeloma develops in B lymphocytes after they have left the part of the lymph node known as the germinal center. The normal cell line most closely associated with MM cells is generally taken to be either an activated memory B cell or the precursor to plasma cells, the plasmablast.

The immune system keeps the proliferation of B cells and the secretion of antibodies under tight control. When chromosomes and genes are damaged, often through rearrangement, this control is lost.

Factors that may increase your risk of multiple myeloma include:

Whats is the First Signs Of Multiple Myeloma?

The first sign of multiple myeloma is bone pain. The diagnosis is usually not detected until the condition has progressed. The disease follows a chronic course, and the time from onset of symptoms to death may be many years. The average survival time for a person after diagnosis is 5 years, but the age of the patient and other health problems can affect this.

The common signs and symptoms of Multiple Myeloma

The tumor burden and the proliferation rate are the two key indicators for the prognosis in patients with MM. Many schemas have been published to aid in determining the prognosis. One schema uses C-reactive protein (CRP) and beta-2 microglobulin (which is an expression of tumor burden) to predict survival, as follows :

Poor prognostic factors include the following:

How Does Multiple Myeloma Kill You?

Multiple myeloma is cancer that starts in the plasma cells in the bone marrow. These cells are responsible for making antibodies to fight infection. The disease often affects the bones, causing pain and fractures, and can also damage the kidneys. The abnormal plasma cells can crowd out healthy blood cells and interfere with the body’s ability to fight infection, leading to anaemia and other problems. The disease can also cause excess protein in the urine, which can lead to kidney failure. Multiple myeloma is the second most common type of blood cancer after non-Hodgkin lymphoma and has an annual incidence of about 3 per 100,000 people.

Homeopathic treatment if started early can control the proliferation of immature or abnormal white blood cells and hence it can prevent further damage to bones, kidneys and vital organs.

Our Homeopathic medicine act at the general level ,can prevent damage to the further chromosomes thus controlling its further multiplication .It can regulate the serum protein level and prevent the calcium levels from rising in the blood and prevent further damage to the kidneys and resorting its function and thus preventing from going into further complications .

Also slows down the rate of getting opportunistic infection thus stabilizing the immunity in the individual.

Some commonly used homeopathic medicines us by our specialists for the treatment of Multiple Myeloma are Arnica Montana, Bryonia, Eupatorium and Symphytum.

Call +91 8080 850 950 to book an appointment or to consult and order online. Consult our specialists today for a detailed evaluation and to start your customised Homeopathic treatment of Multiple myeloma.